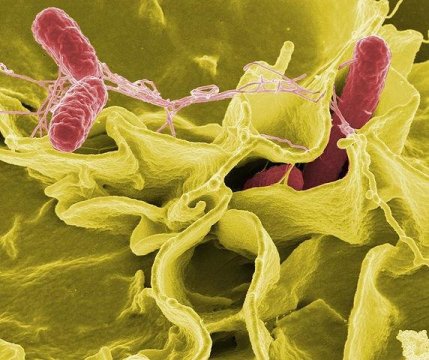 UC Davis researchers announce in the Proceedings of the National Academy of Sciences this week a breakthrough in understanding which cells afford optimal protection against Salmonella infection — a critical step in developing a more effective and safe vaccine against a bacterium that annually kills an estimated one million people worldwide.

Professor Stephen McSorley, interim director of the Center for Comparative Medicine, led a collaborative group of scientists from the University of Melbourne, Australia, the University of Connecticut and UC Davis. They evaluated the difference between circulating and non-circulating memory T cells in providing immunity to Salmonella infection in mice models.

“What everyone has been focused on in immunology, not just in addressing Salmonella, but all infectious diseases for the past 50 years or so, has been antibody and T cell responses,” McSorley said. “What hasn’t been realized until very recently is there are actually two different categories of T cells — those that circulate through tissues in the body and those that never move and are known as tissue resident or non-circulating memory cells.”

Since non-circulating memory T cells were discovered, McSorley said there’s been a rush in different disease models to understand whether they are important or not — in cancer and infectious diseases. It seems in some models they are very important; in others, they are less so.

“It’s a new cell population we haven’t looked at before and they’re very effective so we need to learn more about them,” McSorley said. “They may be part of the answer to developing vaccines against a variety of pathogens.”

The team focused on these non-circulating memory T cells to better understand how well they protected against reinfection from Salmonella Typhi, a strain that causes life-threatening enteric fever commonly in Africa and parts of Asia. Other strains of Salmonella are capable of causing gastroenetritis or invasive non-typhoidal Salmonellosis (NTS), an emerging disease in sub-Saharan Africa. Enteric fever and NTS can be fatal in 20-25 percent of infected individuals without access to medical care.

The researchers transferred circulating and non-circulating memory T cells from mice previously vaccinated into naïve mice. Thanks to fluorescent markers, they were then able to track which of the T cells offered protection against Salmonella infection. They showed that vaccine-mediated protection requires a non-circulating population of liver memory cells that does not circulate through the rest of the body. The unexpected requirement for these liver memory T cells means that generating these cells will form the basis of future vaccines for typhoid and NTS.

NTS has really emerged in Africa in the last 10 years, McSorley said, mainly in young children, the elderly and HIV positive individuals — basically people with compromised immune systems. They get a strain that would normally cause gastroenteritis, but in these individuals, it causes systemic infection and can kill them.

“These forms of disease are really impactful for resource-poor communities in Asia and Africa where the vaccines are either nonexistent or terrible,” McSorley said. “They are diseases of poverty.”

Although there are two vaccines currently available for Salmonella, neither are practical for use in these countries and they only protect about 50 percent of people immunized.

“The goal of our lab is to understand the mechanisms of protective immunity in mice to learn tricks of the immune system and then develop a vaccine that could replicate that to use for kids and people who live in these areas,” he said. “We found that you absolutely need these non-circulating T cells to protect against Salmonella. That’s an important milestone because if you’re going to make a vaccine, you have to know what you’re trying to induce with that vaccine. Now that we know these forms of T cells exist and protect against Salmonella, the next goal is to try to develop synthetic ways to induce them to make a vaccine.”

McSorley said they have some ideas about how to do that and that’s where the next phase of their research is going — to try and take vaccine components in a mouse model to specifically focus on these non-circulating cells and see if they can induce them.

“If we can learn how to better induce them and if we can apply that to a new Salmonella vaccine, it should be more efficient at providing immunity than previous vaccines.”

This study was supported by grants from the NIH’s National Institute of Allergy and Infectious Diseases and the National Health and Medical Research Council of Australia.