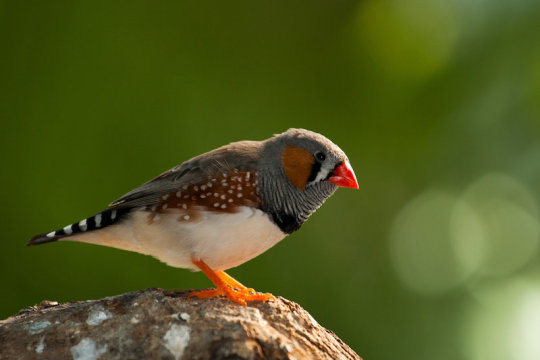 Birds may not have a word for maroon. Or burnt sienna. But show a zebra finch a sunset-colored object, and she’ll quickly decide whether it looks more like “red” or “orange.”

A Duke University study shows that birds mentally sort the range of hues on the blue-green side of the spectrum into two categories too, but the line between them is fuzzier.

It may be that “either/or” thinking is less useful in this part of the color spectrum, the researchers say. Deciding whether, say, a reddish-beaked male is good mate material, or which fruits are ripe is vital for survival, whereas the differences between shades of green grass or blue sky may be less so.

The findings come from a study of something called categorical perception, a mental hack in which the brain subdivides the smooth and continuous range of wavelengths in the visible spectrum into distinct groups of basic colors , such as red, orange, yellow, green, blue and purple.

Categorical perception of color was long thought to be unique to humans, perhaps because human language labels the millions of colors our eyes can distinguish with just a few words. But a previous study led by Duke biology professor Stephen Nowicki showed that birds categorize colors too.

In that study, the researchers tested the birds’ ability to tell whether two shades of red or orange are the same or different.

Males zebra finches have beaks that range from light orange to dark red. Females prefer red-beaked males over orange ones, presumably because red is a sign of better health.

The birds learned that each time they flipped over a two-toned disc with their beak, they found seeds hidden underneath. If they flipped over a solid colored disc, they got nothing. Picking a particular disc before the others was a sign that a bird perceived it as having two colors rather than one.

In the new study, Nowicki, Duke Ph.D. student Matthew Zipple and colleagues tried the same experiment with a different set of colors ranging from green to blue, watching 17 birds as they puzzled through the colored discs in search of treats.

In both studies, the birds were better at distinguishing some color pairs than others, even when those pairs were equally far apart on the color spectrum. By analyzing where these shifts in discernment occurred along the spectrum, the researchers were able to show a threshold effect at work — a clear perceptual boundary where red turns to orange, or blue turns to green.

But for blues and greens, the boundary appears less distinct. The birds were better at recognizing subtle differences within each color category, but less prone to treat colors from opposite sides of the boundary as “either/or” compared to the red-orange range.

The results parallel research on how human brains make sense of color. Previous studies show that people are better at labeling warm colors — reds and oranges — than cool colors. “In many languages there are fewer terms in the blue-green range,” Nowicki said.

But the finding that birds perceive these parts of the spectrum differently lends support to the idea that color categories are more than arbitrary subdivisions of the spectrum shaped by the words we use to describe them, as some researchers have proposed.

One possible explanation for their results is that perhaps this kind of “either/or” thinking is more helpful for some color ranges than others, the researchers say. To a zebra finch, red is a color of attraction. It’s in a female’s best interest to classify a potential mate’s bill as either hot or not, rather than something in the middle.

“It could be that the red-orange color range matters more to them than the blue-green range,” Zipple said.

Another possibility is that, for animals that live on land rather than in the water, the visible light reflecting off the objects in their environment — tree bark, dead leaves, flowers, fruits, fur, feathers and scales — simply contains more variation in the orange-red part of the spectrum .

“It could be that vertebrates are generally better at categorizing colors in the red-orange range more commonly found on land because that’s where they’ve evolved,” Zipple said.

Whatever the reason, the researchers say, the world is awash in color. Categorical perception may be a cognitive shortcut that helps animals take in this barrage of information and focus on what’s important.

“Categorization allows us to take the cloud of stimuli that are always around us, and not have to focus on every one of them individually,” Zipple said. “Instead we’re just able to bin them into different kinds.”

Without it, the world would be “overwhelming,” Zipple said.

The study was published May 29 in the Proceedings of the Royal Society B. Funding was provided by the Duke University Office of the Provost.