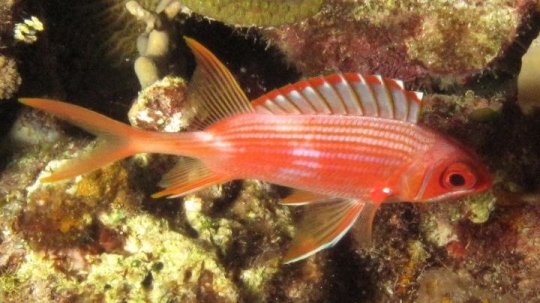 Coral reefs buzz with activity around the clock. As the day-active fishes retreat at dusk, the night-active or nocturnal fishes venture out to forage and hunt. Equipped with special traits, these fishes are adapted to lead a life in darkness. So how do the dark surroundings influence the way they see?

An international team of scientists led by Dr. Teresa Iglesias and Prof. Evan Economo from Okinawa Institute of Science and Technology Graduate University (OIST) set out to investigate this question. They examined how the brains of nocturnal fishes adapt to the low-light conditions they live in. Their findings were recently published in the Journal of Evolutionary Biology.

The retina of the eye has on its surface two types of specialized nerve cells: cones and rods. While cones are activated in bright light, rods work better in dim light. The information captured by these cells is transported by nerves to the visual processing centers in the brain and pieced together into coherent images. In most vertebrates, a brain region called the optic tectum processes visual information, explains Prof. Economo. However, “it is unclear how it should change to maximize effectiveness of low-light vision,” he adds.

To find out, the research team compared the sizes of optic tecta within the brains of fishes that are active during the day and those active at night. More than a hundred fishes from nearly 66 different species were caught from reefs around Hawaii and North Carolina, USA. This catch comprising 44 day-active species and 16 nocturnal species with a wide range of food habits: some ate other fish, others fed on microscopic plankton, and still others were bottom dwelling scavengers. Once caught, the fishes were photographed and their heads preserved in formalin. Later in the lab, the researchers measured the size of each fish’s eye and lens, then scanned the animals’ preserved brains using micro CT scanners.

Bright environments are rich in visual information such as colors, patterns and textures, and deciphering them requires more complex processing than deciphering poorly-lit environments. Take photographs, for example: the latest camera can capture rich colors and minute details of a person or an object. On the other hand, the black and white photographs from an old family album do not reveal as much. Likewise, optic tectum in the brain must be able to process color, pattern and brightness.

The eyes of squirrelfish (Holocentrus rufus), a common nocturnal inhabitant of coral reefs, are almost three times larger than the eyes of day-active fishes of similar body size. Other nocturnal fishes also follow this design pattern. The optic tecta in nocturnal fishes might adapt to darkness by expanding, in order to process the larger volume of information that larger eyes might take in, or it could shrink if the information from low light environments is reduced. Initially, the researchers speculated that retina in such fishes would be loaded with more rods and cones than the day-active fishes, and thus require larger optic tecta to process it.

To their surprise, however, they found that the optic tecta of squirrelfish and other nocturnal fishes were smaller than those of day hunters, suggesting that their brains have sacrificed capabilities that are not as useful at night. Since color is not visible in light-deficient environments, these fishes have limited color acuity and limited depth of vision, but instead, they are adept at detecting movement.

The study also suggests that behavioral traits like the ability of some fishes to camouflage can influence the size of the optic tecta. Among the 66 species of fishes that the scientists sampled, the peacock flounder (Bothus mancus) was found to have the largest optic tectum amongst all. Peacock flounders dwell on sandy floors of reefs and are active during the day, though they prefer to hunt at night. Like chameleons, they are masters of camouflage, and can mimic their surroundings to blend in. This trait, according to the scientists, may explain why peacock flounders possess such highly-developed optic tecta. “Their visual centers may be important for adopting the correct camouflage, but they are also important for detecting predator movements in both bright and dim light,” says Dr. Iglesias.

We still have much to learn about how the environment and behavior of a species can shape the evolution of its brain, the scientists say. However, they believe these findings may help understand how changes in habitat due to human activities, such as light pollution, can interfere with the neuro-sensory capabilities of fishes and other organisms.