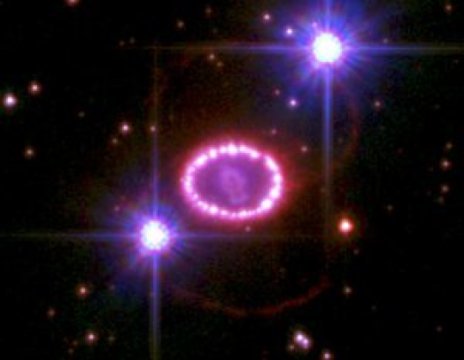 For the first time, astronomers have directly observed the magnetism in one of astronomy’s most studied objects: the remains of Supernova 1987A (SN 1987A), a dying star that appeared in our skies over thirty years ago.

In addition to being an impressive observational achievement, the detection provides insight into the early stages of the evolution of supernova remnants and the cosmic magnetism within them.

“The magnetism we’ve detected is around 50,000 times weaker than a fridge magnet,” says Prof. Bryan Gaensler. “And we’ve been able to measure this from a distance of around 1.6 million trillion kilometres.”

“This is the earliest possible detection of the magnetic field formed after the explosion of a massive star,” says Dr. Giovanna Zanardo.

Gaensler is Director of the Dunlap Institute for Astronomy & Astrophysics at the University of Toronto, and a co-author on the paper announcing the discovery being published in the Astrophysical Journal on June 29th. The lead author, Zanardo, and co-author Prof. Lister Staveley-Smith are both from the University of Western Australia’s node of the International Centre for Radio Astronomy Research.

SN 1987A was co-discovered by University of Toronto astronomer Ian Shelton in February 1987 from the then Southern Observatory of the University of Toronto in northern Chile. It is located in the Large Magellanic Cloud, a dwarf galaxy companion to the Milky Way Galaxy, at a distance of 168,000 light-years from Earth. It was the first naked-eye supernova to be observed since the astronomer Johannes Kepler witnessed a supernova over 400 years ago.

In the thirty years since the supernova occurred, material expelled by the blast, as well as the shockwave from the star’s death throes, have been travelling outward through the gas and dust that surrounded the star before it exploded. Today, when we look at the remnant, we see rings of material set aglow by the supernova’s expanding debris and shockwave.

Using the Australia Telescope Compact Array at the Paul Wild Observatory, Gaensler and his colleagues observed the magnetic field by studying the radiation coming from the object. By analyzing the properties of this radiation, they were able to trace the magnetic field.

“The picture shows what it would look like if you could sprinkle iron filings over the expanding cloud of debris, 170 thousand light years away,” says Gaensler.

“At such a young age,” says Zanardo, “everything in the stellar remnant is moving incredibly fast and changing rapidly, but the magnetic field looks nicely combed out all the way to the edge of the shell.”

Gaensler and his colleagues will continue to observe the constantly evolving remnant. “As it continues to expand and evolve,” says Gaensler, “we will be watching the shape of the magnetic field to see how it changes as the shock wave and debris cloud run into new material.”