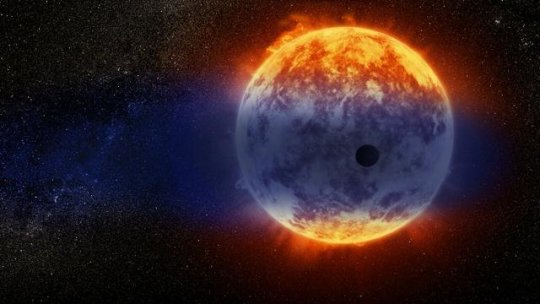 “But where did the hot Neptunes go?” This is the question astronomers have been asking for a long time, faced with the mysterious absence of planets the size of Neptunes very close to their star. A team of researchers, led by astronomers from the University of Geneva (UNIGE), Switzerland, has just discovered that one of these planets is losing its atmosphere at a frantic pace. This observation strengthens the theory that hot Neptunes have lost much of their atmosphere and turned into smaller planets called super-Earths, which are much more numerous. Results to read in the journal Astronomy & Astrophysics.

Fishermen would be puzzled if they netted only big and little fish, but few medium-sized fish. This is similar to what happens to astronomers hunting exoplanets. They found a large number of hot planets the size of Jupiter and numerous others a little larger than the Earth (called super-Earths whose diameter does not exceed 1.5 times that of the Earth), but no planets close to their star the size of Neptune. This mysterious “desert” of hot Neptunes suggests two explanations: either such alien worlds are rare, or, they were plentiful at one time, but have since disappeared.

A few years ago, UNIGE astronomers using NASA’s Hubble Space Telescope discovered that a warm Neptune on the edge of the desert, GJ 436b, was losing hydrogen from its atmosphere. This loss is not enough to threaten the atmosphere of GJ 436b, but suggested that Neptunes receiving more energy from their star could evolve more dramatically. This has just been confirmed by the same astronomers, members of the national research center PlanetS. They observed with Hubble that another warm Neptune at the edge of the desert, named GJ 3470b, is losing its hydrogen 100 times faster than GJ 436b. The two planets reside about 3.7 million kilometres from their star, one-tenth the distance between Mercury and the Sun, but the star hosting GJ 3470b is much younger and energetic. “This is the first time that a planet has been observed to lose its atmosphere so quickly that it can impact its evolution,” says Vincent Bourrier, researcher in the Astronomy Department of the Faculty of Science of the UNIGE, member of the European project FOUR ACES and first author of the study. The team estimates that GJ 3470b has already lost more than a third of its mass.

“Until now we were not sure of the role played by the evaporation of atmospheres in the formation of the desert,” states Vincent Bourrier. The discovery of several warm Neptunes at the edge of the desert losing their atmosphere supports the idea that the hotter version of these planets is short-lived. Hot Neptunes would have shrunk to become mini-Neptunes, or would have eroded completely to leave only their rocky core. “This could explain the abundance of hot super-Earths that have been discovered,” says David Ehrenreich, associate professor in the astronomy department of the science faculty at UNIGE and co-author of the study.

The evolution of the hot Neptune hunt

Observing the evaporation of two warm Neptunes is encouraging, but team members know they need to study more of them to confirm their predictions. Unfortunately, the hydrogen that escapes from these planets cannot be detected if they are more than 150 light-years from Earth (GJ 3470b is 97 light-years away), because hydrogen is then hidden by interstellar gas. Researchers thus plan to use Hubble to look for other traces of atmospheric escape, because hydrogen could drag upward heavier elements such as carbon. The solution could also come from helium, whose infrared radiation isn’t blocked by interstellar medium. “Helium will expand the range of our surveys,” said Vincent Bourrier, “the high sensitivity of the James Webb space telescope should allow us to detect helium escaping small planets, such as mini-Neptunes, and complete our observations of the edge of the desert.”