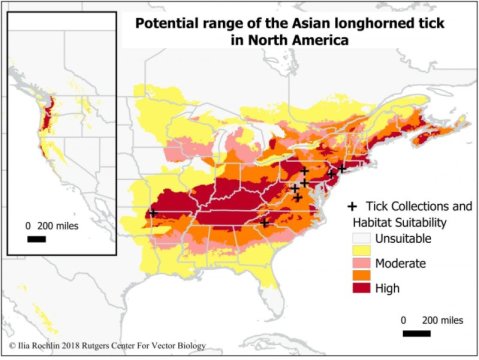 Since the arrival of the Asian longhorned tick in North America was first reported in New Jersey in early 2018, it has been found in eight other states in the U.S. And, by the looks of a new study comparing North American habitat with the invasive tick’s native territory, it shouldn’t be a surprise if it shows up in many more.

Ilia Rochlin, Ph.D., entomologist and researcher affiliated with the Rutgers University Center for Vector Biology, studied climate data from East Asia, Australia, and New Zealand, where the Asian longhorned tick (Haemaphysalis longicornis) is already established, and used climate data from North America to model likely suitable habitat for the tick. The results, published today in the Journal of Medical Entomology, suggest the Asian longhorned tick could survive in a large swath of eastern North America as well as in the coastal Pacific Northwest.

Haemaphysalis longicornis is the first invasive tick to emerge in the United States in about 80 years, according to the U.S. Centers for Disease Control and Prevention (CDC). While it has yet to be found transmitting disease-causing pathogens to humans in North America, it has shown the ability to do so in Asia. It is also a cause for concern for animals and livestock, both in its ability to transmit disease and because severe infestations of the blood-feeding ticks can weaken animals by depleting their blood supply. Moreover, the tick has the unusual ability to reproduce via parthenogenesis — i.e., without fertilization, in which females produce offspring that are essentially clones of herself. That, combined with its potential range, make tick in all likelihood here to stay, Rochlin says. Now, it’s important to monitor the species’ habitat expansion.

“At these initial stages of the Asian longhorned tick invasion, this coarse-scale modeling can alert public health and veterinary authorities in moderate- to high-risk regions,” he says. “Hopefully, this awareness will lead to increased surveillance and expanded public outreach and education, especially to the most exposed: farmers, hunters, outdoor workers, pet owners.”

Rochlin’s study used climate data from 260 locations of reported Asian longhorned tick presence each in China, Japan, Korea, Australia, and New Zealand and analyzed variables such as average annual temperature and annual rainfall to find the climate factors most predictive of the tick’s presence. Applying this model to North American climate data showed the most suitable habitat for the Asian longhorned tick to include coastal areas from New Brunswick and Nova Scotia in Canada to Virginia and North Carolina on the east coast and from southern British Columbia to northern California on the west coast. Large inland swaths were also found suitable, from northern Louisiana to Wisconsin and into southern Ontario and Quebec, as well as westward extending into Kentucky, Tennessee, and Missouri. Outside these areas, habitat suitability declines, due to warmer temperatures to the south, cold winters to the north, and dry terrain in the west.

“This particular model is good for determining the potential tick habitat on very large scales — a continent, a country, or a state. It does not tell you where the ticks will be encountered on the local landscape,” Rochlin says. “We need to learn more about this tick species’ biology, ecology, and local distribution. Eventually, when more data are available, localized fine-scale habitat modeling on a county or township level can delineate high-risk areas and provide guidance for surveillance and control efforts.”

Such work would align with similar research on native tick species in North America, which have emerged as a major public-health threat in the last couple decades. The CDC reported in May 2018 that reported cases of vector-borne diseases (caused by pathogens transmitted by ticks, mosquitoes, and other arthropods) tripled in the United States between 2004 and 2016, and more than 59,000 cases of tick-borne infections were officially reported to the CDC in 2017. However, because most cases aren’t reported to the CDC, the agency estimates that as many as 300,000 people in the United States are infected with Lyme disease alone each year.

In late November 2018, leaders of the CDC’s Division of Vector-Borne Diseases called for the creation of a national vector-borne disease prevention and control system. Rochlin, for one, agrees.

“The main question I am often asked is ‘What can be done about ticks?’ — and I don’t have a good answer to that. While research and surveillance are important, we are in dire need of comprehensive tick-control strategy and new tools to carry it out,” he says. “Mosquito control has been very successful in this country, but we are losing the battle with tick-borne diseases.”