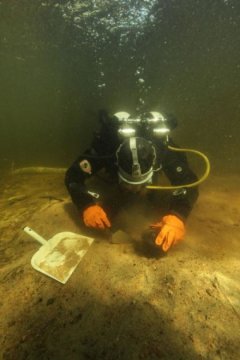 The prehistoric settlement submerged under Lake Kuolimojarvi provides us with a clearer picture of the human occupation in South Karelia during the Mesolithic and Early Neolithic Stone Age (about 10,000 — 6,000 years ago) and it opens up a new research path in Finnish archaeology.

In the early Stone Age, the water levels in the small lakes located in the southern parts of what are today Lake Kuolimojarvi and Saimaa were several metres below the present levels. After this period, the water levels started rising as a result of uneven land uplift and the tilting of lakes and rivers. The rise in water levels ended with the outburst of River Vuoksi through the Salpausselka; Ridge about 6,000 years ago when water masses carved a new southeastern outflow channel towards Lake Ladoga.

With the rise in water levels, areas that were on dry land in the early Stone Age have been buried in the bottom of the lake and its littoral deposits.

The aim of the three-year study carried out by the University of Helsinki has been to find traces of early Stone Age settlements under water and from wetlands at lakes Kuolimojarvi and Saimaa.

“This means that there is a huge gap in our archaeological knowledge of this particular area because we have not yet found the earliest Stone Age sites,” explains postdoctoral researcher Satu Koivisto who heads the project.

So far the oldest sites have been settled after the breakthrough of River Vuoksi (from 6000 years ago and onwards). However, there has definitely been human habitation in this area for thousands of years before that, as is shown by the traces of settlements of more than 10,000 years old discovered at Kuurmanpohja in Joutseno further to the south.

Charcoal, burned rocks and quartz flakes have been found at the site

In June 2018, archaeologists carried out underwater excavations and equipment testing at Kammarlahti bay in Savitaipale in cooperation with Nordic Maritime Group (NMG) and the underwater unit of the Finnish Heritage Agency. Archaeologists from Denmark and Sweden also took part in the work.

The work started with a thorough study of the lakebed the purpose of which was to find archaeological remains by mapping the best-preserved areas.

“The western side of the Kammarlahti bay is sheltered from wind and waves and for this reason, the prehistoric dry land areas are best preserved in that part. In one of the test pits, we found a distinct layer of burned soil, charcoal and burned rocks. Quartz flakes were also found in the surrounding test pits and these remains show that quartz artefacts had been made at the site during the Stone Age,” Koivisto explains.

The hearth feature and associated find materials indicate that a submerged Stone Age settlement site has now been located at Lake Kuolimojarvi — the first undisputed observation of this kind in Finland. The nearest similar sites are located in northwestern Russia and southern parts of Scandinavia. It is clear that the hearth feature, which today lies at a depth of about one metre, and the other finds are from the period before the rise of the water level (about 9,000 to 8,000 years ago). The archaeologists managed to take a soil sample of the burned layer around the hearth and are now trying to find datable material from it.

“With the excavation equipment tested in the underwater research at Kammarlahti, we may also be able to find other submerged sites at similar locations. For this reason, the discovery opens up an entirely new era in the research into the Finnish Stone Age. Many of our large lakes, such as Vanajavesi, Pielinen and Oulujarvi have also gone through similar fluctuations in water levels. This means that a huge and largely untapped archaeological resource is hidden in Finnish lakes. Moreover, extremely old organic materials may also have been preserved in these environments for thousands of years,” Satu Koivisto says, describing Finland’s underwater archaeological potential.

The excavation sites were located in a preliminary study

A thorough preliminary work prompted the archaeologists to select Kammarlahti for underwater excavations. The most promising areas for the preservation of submerged sites were located already in a desk-based assessment and a field survey was carried out in them in Lappeenranta, Savitaipale and Taipalsaari in 2015. More detailed investigations were carried out in 2017 and 2018 at Rajalamminsuo and Kammarlahti at Lake Kuolimojarvi as well as at Sarviniemi and Ahoselka; at Lake Saimaa. In the summer of 2017, peatland excavations were conducted at Rajalamminsuo while Kammarlahti was combed by divers. These investigations also produced clear evidence that in the early Stone Age, the level of Lake Kuolimojarvi was several metres below present levels. This finding prompted experts to revise their previous assumptions of the history of the lake.

The peatland excavations also revealed a distinct charcoal-rich layer underneath the peat, which had been created as a result of human activity, starting at the Late Neolithic and extending to the Iron Age (about 2000 BCE — 600 CE). The divings carried out at Kammarlahti revealed a small number of old wooden structures and signs of interesting areas that were selected for further underwater excavations in 2018. The three-year archaeological project ‘Lost Inland Landscapes’ of the University of Helsinki will be concluded at the end of the year. The funding for the project comes from the University’s three-year research grants and it is headed by archaeologist Satu Koivisto, who works as a postdoctoral researcher at the university.

This is in many ways a multidisciplinary project and cutting-edge technology has also been used in the planning of the field work and in the modelling of the previous stages of the lakes and underwater topography. An international reference group, with members from Sweden, Germany, Denmark, Latvia, Russia and Finland, has been set up for the project. The group brings together archaeologists and geologists who are experts on similar environments and archaeological sites in the Baltic region. In this manner, the group promotes international cooperation in an archaeological sector that is extremely challenging but also important in terms of research.