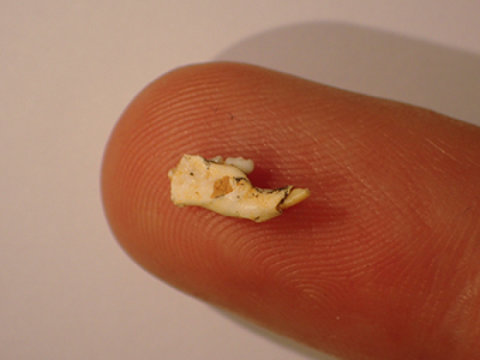 The fossils of two extinct mice species have been discovered in caves in tropical Queensland by University of Queensland scientists tracking environment changes.

Dr Jonathan Cramb from UQ’s School of Earth and Environmental Sciences said the finds show that analysing fossils found in caves could help determine how the local environment had changed over time.

“Caves are great places for the preservation of fossils, partially because they’re natural traps that animals fall into, but also because they’re roosting sites for owls and other flying predators,” he said.

“Owls are exceptionally good at catching small mammals in particular, so the cave floor beneath their roosts is littered with the bones of rodents and small marsupials.

“The accumulation of bones build up over time, providing us with a record of what species were living in the local area, which can stretch back hundreds of thousands of years.

“Many species are only found in certain habitats — for example, hopping mice (Notomys spp.) generally live in deserts, while tree mice (Pogonomys spp.) only live in rainforests — so changes in the fauna tell us about changes in the environment.”

Dr Cramb said the team, including UQ’s Dr Gilbert Price and alumnus Scott Hocknull from the Queensland Museum, was able to confirm a number of environmental changes thanks to the fossils.

“Our findings show that the caves around Mount Etna had gone through a period of local extinction of rainforests, which were replaced by dry to arid habitats less than 280,000 years ago,” Dr Cramb said.

“My colleagues and I wondered if the same environmental change happened elsewhere in Queensland, which is why we were searching the caves near Chillagoe.

“Our analysis of fossils from the caves in north-east Queensland has shown that rainforest extinction was widespread.

“This research shows that, at least in these instances, rainforest extinction is correlated with a sudden shift in climate — a warning that rainforests are particularly vulnerable to climate change.”