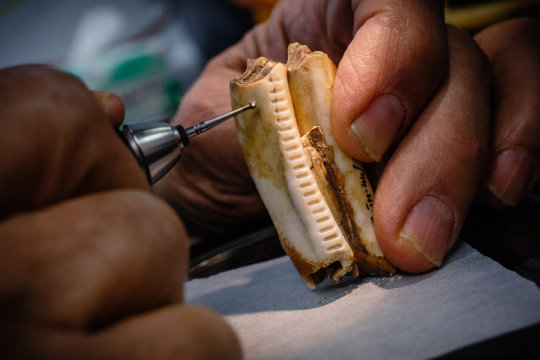 Ancient animal herders added to the ecological richness and diversity of the African savanna thousands of years ago — an effect that persists to the present day, a new study finds. The herders’ practice of penning their cattle, goats and sheep at night created nutrient-rich grassy glades, called hotspots, that still attract wildlife and have increased habitat diversity in the region, researchers report in the journal Nature.

Typically, the African savanna is scrubby, with small trees and shrubs and lots of bare soil, said University of Illinois anthropology professor Stanley Ambrose, who led the new research with Fiona Marshall of Washington University in St. Louis. The herding hotspots appear on the landscape today as dense, grassy areas several acres in diameter, he said.

“When Stone Age herders came to eastern Africa 3,500 years ago, they changed vegetation patterns for the better, rather than degrading the savanna, as is often believed,” Ambrose said. “Their abandoned settlements increased savanna grassland ecosystem diversity, resilience and stability.”

To understand the long-term contributions of ancient pastoralists, the researchers focused on five Neolithic herder archaeological sites in southwestern Kenya and compared their plant communities and soil chemistries with natural sites nearby. Radiocarbon dating indicated that the herding sites date to between 1,500 and 3,700 years ago.

The team used a variety of techniques to analyze archaeological sediments, including chemical composition analyses, isotope ratio mass spectrometry, sedimentology and microscopic morphology. This allowed them to differentiate the soil characteristics of sites that were and were not used by animal herders.

Study co-authors Ruth Shahack-Gross of the University of Haifa and Rachel E. B. Reid of Washington University found that, compared with other locales, the ancient herding sites had elevated levels of nitrogen and mineral nutrients, especially phosphorus and calcium. The chemical varieties, or isotopes, of nitrogen and carbon on the pastoral sites were consistent with those found in dung and urine from herbivores that graze on grasses.

“Phosphorus originates from the organic component of dung,” Shahack-Gross said. “Calcium carbonate — like that found on the herder pen sites — is concentrated in decomposed dung in the form of tiny particles called spherulites.”

“Bones also are sources of phosphate, magnesium and calcium, all of which we found at higher concentrations in the soil of the ancient herding sites,” she said.

All of these characteristics would improve soil fertility and promote the growth of high-quality forage in these limited patches, the researchers said.

“Without this human-induced increase in diversity, the landscape would lack hotspots of this scale,” Ambrose said. “The largest hotspots would have been only a few meters across, centered on termite mounds. The vegetation patterns would have been much more uniform, and the ecosystem would have been simpler and less resilient.”

The biological richness of the pastoral sites continues to attract animals to these locales, reinforcing their status as nutrient-rich patches, Ambrose said.

“These hotspots are preferred feeding areas for both wild and domestic herbivores,” he said. “The animals often feed there early in the day and get a nutritious breakfast that helps sustain their energy throughout the day.”

The continued deposition of dung and perhaps even the wild animals’ grazing behavior likely lead to feedbacks that further enriched the sites, he said.

“Our study indicates that herders may have had a role in structuring and diversifying African savanna ecosystems for up to three millennia,” Ambrose said.