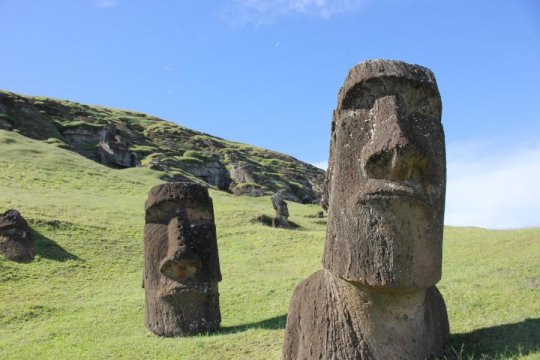 You probably know Easter Island as “the place with the giant stone heads.” This remote island 2,300 miles off the coast of Chile has long been seen as mysterious — a place where Polynesian seafarers set up camp, built giant statues, and then destroyed their own society through in-fighting and over-exploitation of natural resources. However, a new article in the Journal of Pacific Archaeology hints at a more complex story — by analyzing the chemical makeup of the tools used to create the big stone sculptures, archaeologists found evidence of a sophisticated society where the people shared information and collaborated.

“For a long time, people wondered about the culture behind these very important statues,” says Field Museum scientist Laure Dussubieux, one of the study’s authors. “This study shows how people were interacting, it’s helping to revise the theory.”

“The idea of competition and collapse on Easter Island might be overstated,” says lead author Dale Simpson, Jr., an archaeologist from the University of Queensland. “To me, the stone carving industry is solid evidence that there was cooperation among families and craft groups.”

The first people arrived on Easter Island (or, in the local language, Rapa Nui) about 900 years ago. “The founding population, according to oral tradition, was two canoes led by the island’s first chief, Hotu Matu’a,” says Simpson, who is currently on the faculty of the College of DuPage. Over the years, the population rose to the thousands, forming the complex society that carved the statues Easter Island is known for today. These statues, or moai, often referred to as “Easter Island heads,” are actually full-body figures that became partially buried over time. The moai, which represent important Rapa Nui ancestors, number nearly a thousand, and the largest one is over seventy feet tall.

According to Simpson, the size and number of the moai hint at a complex society. “Ancient Rapa Nui had chiefs, priests, and guilds of workers who fished, farmed, and made the moai. There was a certain level of sociopolitical organization that was needed to carve almost a thousand statues,” says Simpson.

Recent excavations of four statues in the inner region of Rano Raraku, the statue quarry, were conducted by Jo Anne Van Tilburg of Cotsen Institute of Archaeology, UCLA and director of the Easter Island Statue Project, along with her Rapa Nui excavation team. To better understand the society that fabricated two of the statues, Simpson, Dussubieux, and Van Tilburg took a detailed look at twenty one of about 1,600 stone tools made of volcanic stone called basalt that had been recovered in Van Tilburg’s excavations. About half of the tools, called toki, recovered were fragments that suggested how they were used.

For Van Tilburg, the goal of the project was to gain a better understanding of how tool makers and statue carvers may have interacted, thus gaining insight into how the statue production industry functioned. “We wanted to figure out where the raw materials used to manufacture the artifacts came from,” explained Dussubieux. “We wanted to know if people were taking material from close to where they lived.”

There are at least three different sources on Easter Island that the Rapa Nui used for material to make their stone tools. The basalt quarries cover twelve square meters, an area the size of two football fields. And those different quarries, the tools that came from them, and the movement between geological locations and archaeological sites shed light on prehistoric Rapa Nui society.

“Basalt is a grayish rock that doesn’t look like anything special, but when you look at the chemical composition of the basalt samples from different sources, you can see very subtle differences in concentrations of different elements,” explains Dussubieux. “Rock from each source is different because of the geology of each site.”

Dussubieux led the chemical analysis of the stone tools. The archaeologists used a laser to cut off tiny pieces of stone from the toki and then used an instrument called a mass spectrometer to analyze the amounts of different chemical elements present in the samples. The results pointed to a society that Simpson believes involved a fair amount of collaboration.

“The majority of the toki came from one quarry complex — once the people found the quarry they liked, they stayed with it,” says Simpson. “For everyone to be using one type of stone, I believe they had to collaborate. That’s why they were so successful — they were working together.”

To Simpson, this level of large-scale cooperation contradicts the popular narrative that Easter Island’s inhabitants ran out of resources and warred themselves into extinction. “There’s so much mystery around Easter Island, because it’s so isolated, but on the island, people were, and still are, interacting in huge amounts,” says Simpson. While the society was later decimated by colonists and slavery, Rapa Nui culture has persisted. “There are thousands of Rapa Nui people alive today — the society isn’t gone,” Simpson explains.

Van Tilburg urges caution in interpreting the study’s results. “The near exclusive use of one quarry to produce these seventeen tools supports a view of craft specialization based on information exchange, but we can’t know at this stage if the interaction was collaborative. It may also have been coercive in some way. Human behavior is complex. This study encourages further mapping and stone sourcing, and our excavations continue to shed new light on moai carving.” In addition to potentially paving the way for a more nuanced view of the Rapa Nui people, Dussubieux notes that the study is important because of its wider-reaching insights into how societies work. “What happens in this world is a cycle, what happened in the past will happen again,” says Dussubieux. “Most people don’t live on a small island, but what we learn about people’s interactions in the past is very important for us now because what shapes our world is how we interact.”