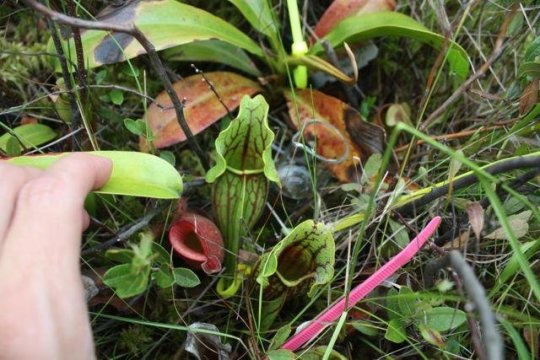 After a six-hour ride over increasingly treacherous roads, it took a full day’s hike up almost 3,000 feet for Leonora Bittleston to reach Nepenthes Camp in the Maliau Basin, an elevated conservation area in Malaysian Borneo with a rich, isolated rainforest ecosystem.

After waiting three years for collecting permits, Bittleston, then a graduate student at Harvard University, entered the basin in search of one thing: pitcher plants. These carnivorous plants have evolved traps to lure, drown and digest animal prey to supplement nutrient-poor soils.

Bittleston needed samples of the liquid inside the pitchers to compare to pitcher plants from much closer to home in Massachusetts and along the Gulf Coast. Though unrelated, both plant families had converged on similar adaptations for trapping prey, and Bittleston wanted to know if the communities of microbes and small animals housed in each liquid-filled pitcher were as similar as the traps themselves.

In new research published Aug. 28 in the journal eLife, Bittleston, University of Wisconsin-Madison botany and bacteriology professor Anne Pringle, and others, reveal that the communities created inside pitcher plants converge just as the shape and function of the plants themselves do. Despite being separated by continents and oceans, pitchers tend to house living communities more similar to one another than they are to their surrounding environments.

Asian pitchers transplanted to Massachusetts bogs can even mimic the natives so well that the pitcher plant mosquito — a specialized insect that evolved to complete its life cycle exclusively in North American pitchers — lays eggs in the impostors.

The researchers say this work provides a much richer picture of how convergence can extend well beyond relatively simple functional roles, like plant carnivory, to include a network of interactions among different species that evolve under related conditions. Bittleston and Pringle collaborated with Naomi Pierce at Harvard, as well as researchers at the Universiti Malaysia Sabah, University of Malaya and Jiangsu University.

Pitcher plants are classic examples of convergent evolution, where unrelated organisms nonetheless home in on similar adaptations to their environment. Along with Venus fly traps and other carnivorous plants, pitcher plants also capture the imagination by turning the tables on animals as they devour them.

But despite that gruesome image, pitcher plants serve as more than just death traps — they are also ecosystems unto their own. Each liquid-filled pitcher houses diverse microbial life and even living complex organisms and insects that escape digestion. It’s those communities that attracted the attention of Pringle and Bittleston.

“We spent hours talking about what a convergent ecosystem would look like,” says Pringle, who began the research while she was at Harvard. “We discussed the idea that similar interactions between species could evolve over and over again.”

Pitcher plants were a natural model to test these ideas. The traps are essentially sterile before they open. Yet during the lifespan of an individual pitcher, they seemed to curate predictable communities of microbes and small invertebrates. This suggested to Pringle and Bittleston that the pitchers created consistent conditions that repeatedly selected for similar communities. Since the Southeast Asian and North American pitchers were so outwardly similar, the researchers wondered if their miniature ecosystems would be as well.

It was a taxing research project that required collecting samples in dense, often inaccessible bogs. Bittleston traveled to state protected areas around the Gulf Coast and to bogs in the Harvard Forest to gather samples from the North American species. And in addition to the trek to the Maliau Basin, she collected fluid from pitchers in Singapore’s protected parks, a comparatively easy, but memorable, venture.

“There were times I was on this very clean Singaporean subway in my field clothes, super sweaty, with these big bags full of tubes with pitcher plant samples,” says Bittleston, who is now a postdoctoral researcher at the Massachusetts Institute of Technology. “So it was a funny scene.”

With more than 330 samples from 14 species in hand, the researchers used advanced gene sequencing technology to get a snapshot of the various species making a home inside the pitchers, as well as the species found in nearby soil and water samples. When analyzed for the number and type of species and similarities in community structure, some clear patterns emerged.

While environmental samples contained a large number of different species, the liquid in both groups of pitcher plants had a greatly reduced diversity, indicating a more specialized environment. And the species that pitchers housed tended to come from the same families. Both Southeast Asian and North American pitchers greatly enriched for bacterial organisms like the Actinomycetales or Enterobacteriaceae as well as insects in the fly order and microscopic, filter-feeding animals called rotifers.

The researchers also set up a field experiment, transporting potted Southeast Asian pitchers to bogs in the Harvard Forest and looking at how the pitcher communities developed.

“And in fact, the Southeast Asian species assembled communities that looked like the North American communities,” says Pringle. “That’s cool.”

One clear example of this similarity was the presence of pitcher plant mosquito larvae, normally found exclusively in North American pitchers, in the non-native Asian pitcher plants. Only the most acidic Asian pitchers were inhospitable to this specialized insect.

Alongside the pitcher plants, Bittleston set out test tubes that mimicked the cylindrical shape of the pitchers. Like the pitchers, these test tubes collected rain water and began to develop miniature ecosystems. But the biological communities in the test tubes assembled were off a bit from the natural pitchers, and the tubes never fooled the mosquitoes, which steered away from them.

“It’s not enough to be a passive receptacle that captures rain water and some drowned insects,” says Bittleston. “There really is something that’s different about being this convergently evolved organism that creates a particular environment that curates a particular community.”

The work lends support to ideas Bittleston and Pringle developed in previous work: that the interactions between different species can converge during evolution just as the forms and functions of individual species can.

“These pitchers are independently evolved, two very different families of plants, but they interact with the microbial communities that they’re assembling within them in some similar manner,” says Pringle. “And we’re finding that those interactions are predictable in some way.”