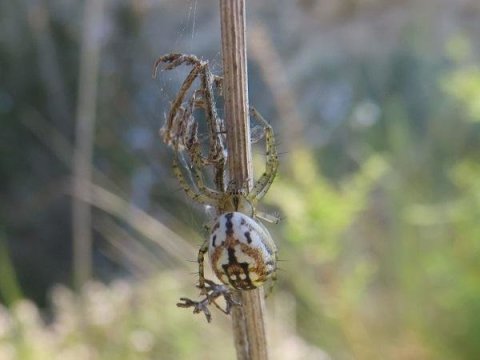 The new study, covering the largest study area on this animal group in peninsular territory, is now published in the journal Biodiversity Data Journal. Other participants in the study are the experts from the Experimental Station of Arid Zones (EEZA-CSIC) and the University of Helsinki (Finland).

A sampling of more than 20,000 spider samples

The scientific team has studied a total of 20,539 samples of different Iberian spider species -with 8,521 adult specimens corresponding to 190 genera, 39 families and 376 species- in the oak woodlands of National Parks in Aiguestortes i Estany de Sant Maurici, Ordesa i Mont Perdut, the Peaks of Europe, Monfragüe, Cabañeros and Sierra Nevada.

These forests with temperate climate -where arboreal species and deciduous trees are abundant- represent the most appropriate natural habitat “to study the biogeographic patterns of spiders at a peninsular scale,” says Professor Miquel Àngel Arnedo. “In a broader sense, oak woodlands are a few of the forest communities that are represented in all National Parks building up our study. These are natural habitats of interest regarding conservation, and show a high level of endemism and their evolutionary history is quite well known.”

Iberian arachnology: an area to be explored

The degree of knowledge on the geographic distribution of Iberian spiders is still very little compared to other Mediterranean countries. “The lack of tradition in natural history studies in the country and the reduced amount of admirers of arachnology could explain these differences,” says Arnedo, member of the Department of Evolutionary Biology, Ecology and Environmental Sciences of the Faculty of Biology and IRBio.

The research team has found eleven new spider species -so far more than 1,300 species were known in the peninsula and the Balearic Islands- apart from other twenty species whose taxonomic identification is still pending. According to the experts, some of the new species could be especially vulnerable to the environmental factors (in most of the cases, only one or a few individuals have been discovered in one geographical place or even one parcel).

Moreover, the experts add seven new spider species to the peninsular biological inventory -and three more in the Spain- with the identification in the area of species such as Dictyna pusilla, Philodromus buchari, Pseudeuophrys nebrodensis, Euryopis flavomaculata, Titanoeca schineri, Dipoena torva and Sardinion blackwalli, some of them described in the scientific bibliography since the late 19th century. “None of these species can be considered as rare -notes Arnedo- since they had been identified in other places such as France, Portugal and Central Europe.”

“There are still many spider species to be found,” adds Arnedo. “These results show there is a lack of systematic samplings in the arachnological biodiversity in Spain and are a good example of the few things we know about our own fauna.”

The sampling technique for spider specimens in the natural environment has followed the standardized protocol COBRA. This methodology -applied in studies of terrestrial arthropod communities worldwide- enables researchers to create an inventory of the species in a specific area and brings data to extrapolate the amount and abundance of species that can live in a geographical area.

Moreover, the methodology based on content such as DNA barcoding -that is, the use of a short and standardized DNA fragment as the identifier of a species- is the innovating technique for applied comparative genetics to speed up the identification of species and improve the resolution of the analysis of biodiversity in this animal group. “This methodology enables developing high-resolution bioinformatic tools to help automatizing the classification and identification of species, even in populations of the same species in different places,” says Arnedo.

“For instance, young individuals cannot be classified as species through morphological criteria, which in many cases they only reach the family taxon. With the DNA barcoding we can categorize them under specific species. This technique also helps to identify different vital stages in the same species -even remains such as exuvia or overlayers, excrements or environmental DNA- which would be impossible to distinguish otherwise.

Loss of natural habitat, invasive species, environmental pollution and global warming are threats that put the conservation of peninsular arachnological fauna in danger. Some spider species tolerate environmental perturbations better than others -these are generalist predators and adapt to changes- but other groups are more sensitive to environmental factors. In the future, samplings will need standardized protocols and wider taxonomical data with nuclear molecular markers, the morphological studies and ecological information as well to know about the evolutionary and biogeographic history of peninsular spiders to guarantee their conservation.

“Like the other organisms, spiders are submitted to variations in their environmental and biological environment. We are all in the same boat and with the same destination, the difference is that we are the in charge of this destiny,” concludes Professor Miquel Àngel Arnedo.