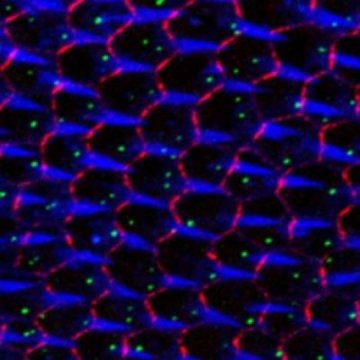 Investigators from the Neurodegenerative Diseases Research Group at the University of Extremadura are working on a line of research which studies signalling mediated by a pathway known as planar cell polarity (PCP), which regulates the coordinated orientation of cells during organogenesis, or the process of organ formation in living organisms. This is a pathway which has been highly conserved on the evolutionary scale, and one of its key functions in vertebrates is the regulation of the coordinated positioning of centrioles/ciliary basal cells inside cells.

This signalling pathway was discovered initially in the fruit fly genus Drosophila, the laboratory model organism used by researchers, although the majority of the pathway components have been retained in humans. It has likewise been observed that certain pathologies such as hydrocephaly, infertility and some kinds of cancers are associated with defective functioning of this signalling.

Under the auspices of the project EPICENTR within the Spanish national research plan, whose objective is to study the planar polarisation of centrioles in epithelial cells, the UEx researchers have now published the first results of their investigation in the journal Development. These results are related to the polarised positioning mechanism of centrioles in Drosophila and its correlation with actin.

“We have developed a methodology with new algorithms to analyse the location of the centriole in a model cell. Thanks to this technology, we have been able to discover how the actin cytoskeleton, which is part of the cell scaffolding, is involved in the polarised placement of centrioles in Drosophila, just as happens in vertebrates. Nevertheless, the well-known signalling route downstream PCP, which controls the actin cytoskeleton, does not affect the positioning of centrioles in Drosophila,” explains José María Carvajal, lead researcher on this project. The PCP-dependent factors which affect the location of the centriole in humans and in vertebrates are not found in Drosophila. It follows that there are new proteins to be discovered in Drosophila which influence the actin and the location of centrioles.

“The advantage is that in this investigation, we provide a technology for image analysis. We have applied new algorithms to analyse where the centrioles are in epithelial cells using an imaging system, yielding a model that enables us to extract the variety of possible positions for the centriole inside a cell,” emphasises Carvajal.

Now, the researchers are studying another cell polarity mechanism in human cells, by carrying over the Drosophila biological model to vertebrates. They will describe its effects on the respiratory system, in the so-called ciliopathies, illnesses arising out of malfunctioning of the cilia inside the cell.

Materials provided by University of Extremadura. Note: Content may be edited for style and length.