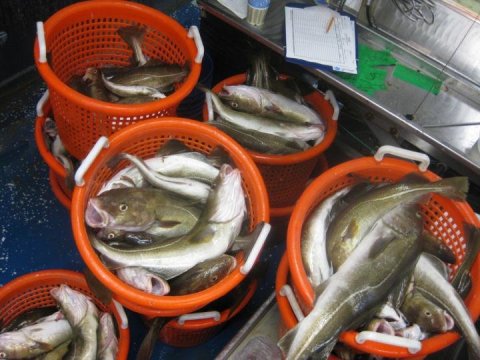 In seasonal environments, timing is everything: Ecosystem dynamics are controlled by how well predators can match their prey in space and time. A recently published study led by University of Hawai’i (UH) at M?noa oceanographer Anna Neuheimer, revealed that fish parents “predict” a beneficial environment for their offspring with populations “adjusting” spawning time so that the young can meet their prey. Survival at this early stage affects population size and shapes how many fish will be available to fisheries in later years.

Atlantic cod, a wide-ranging and economically important fish, reproduce at different times of the year — varying 86 days across the species’ range (nearly 40? latitude) in the north Atlantic Ocean. This pattern is unexplained by temperature variation but had been suspected of being adaptive, that is, providing some advantage to the populations.

For researchers, estimating the timing of both the Atlantic cod young and their prey has been a challenge as these are not typically life stages that are observed directly in the field.

To overcome this challenge, Neuheimer, an associate professor at the UH M?noa School of Ocean and Earth Science and Technology (SOEST) and visiting researcher at the Aarhus Institute of Advanced Studies at Aarhus University (Denmark), and co-authors (at DTU Aqua, Denmark) developed new tools that combined data on the timing of observed stages, temperatures across the North Atlantic and temperature-dependent development rates to estimate timing of — and the match between — the targeted stages of young fish and their food.

The research team found evidence that the reproductive timing of Atlantic cod is adapted to allow their young to match the seasonal occurrence of their food, a critical component of survival.

“This timing match is a challenge for the parents, as eggs take weeks to develop before the young fish need to feed — that is, they must “predict” when their young’s food will occur weeks in advance,” said Neuheimer.

While this finding was predicted by a century-old hypothesis called the Match-Mismatch Hypothesis, this study provided some of the first evidence of timing adaptation consistent with this idea.

As the climate changes, seasonal timing is advancing 30-40% faster in the ocean than on land. This study, at the nexus of ecology and evolution, provides new tools that can be used to help predict fisheries catch changes in the future.

“Additionally, life history studies on wide-ranging marine organisms can give an early indication of what might occur for organisms in other habitats,” said Neuheimer. “Identifying the factors shaping adaptive variability is key to determining how biology will respond to climate forcing now and in the future.”

For the duration of her fellowship at the Aarhus Institute of Advanced Studies, Neuheimer will continue to explore how the relative match between young fish and their prey results in fisheries catch changes from year to year, and how timing of fish and their prey may shift in the future. This work is also being used to create new models of reef fish timing around the Hawaiian Islands to explain and predict shifts in the number of young reef fish from year to year.