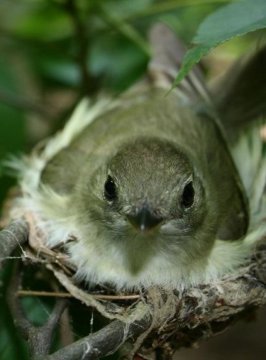 A warmer future may lead to a common Midwestern songbird becoming considerably less common, according to a team of researchers whose study of the population-level impacts of climate change on Acadian flycatchers was published today in the journal Nature Climate Change.

The study by lead author Thomas Bonnot of the University of Missouri-Columbia and co-authors, including Frank Thompson, a research wildlife biologist with the USDA Forest Service’s Northern Research Station, predicted Acadian flycatcher populations through the year 2100 across the 96-million-acre Central Hardwoods Region.

To assess how climate change might affect the Acadian flycatcher’s regional population over time, researchers combined data on local-scale, individual breeding productivity with different climate scenarios in a dynamic-landscape metapopulation model. Under severe warming projections, flycatchers breeding in many areas of the Central Hardwoods would produce fewer than one fledgling per female per year by 2100, researchers found.

“With breeding productivity reduced to this extent, this currently abundant species will suffer population declines substantial enough to pose a significant risk of quasi-extinction from the region in the twenty-first century,” according to Thompson.

In addition to changes in forest habitat that would affect flycatchers, warmer temperatures are likely to increase nest predation, especially by snakes, which are a significant predator on Acadian flycatcher nests.

“Our study focused on flycatchers, but many songbirds face the same predators and are also susceptible to similar temperature effects,” Thompson said. “Our work underscores the threat climate change poses to entire populations. Many factors affecting flycatcher populations are likely to change over that time period, so we don’t realistically expect flycatcher populations to react exactly as we predicted. However, our study illustrates a very important point, which is that climate change can affect populations in very complicated ways with potentially severe consequences to wildlife.”

In addition to Thompson and Bonnot, authors include Andrew Cox of the Florida Fish and Wildlife Conservation Commission and Joshua J. Millspaugh of the University of Montana-Missoula.