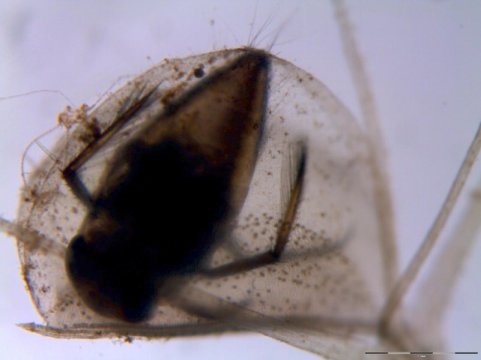 The Freiburg biologists Dr. Simon Poppinga, Anna Westermeier and Prof. Dr. Thomas Speck, working in cooperation with researchers from the Ruhr University Bochum and the Institute of Botany of the Czech Academy of Sciences in T?ebo? (Czech Republic), have for the first time reconstructed in detail the “menu” of the carnivorous waterwheel plant (Aldrovanda vesiculosa). This shows that the plant is not at all fussy about what it eats, and catches anything and everything that fits into its trap and triggers the snap mechanism. The team has published its results in the open-access journal Integrative Organismal Biology.

Using its snap traps, which are only a few millimeters in size, the waterwheel plant catches prey animals that live underwater. The traps snap shut within about 20 milliseconds of mechanical stimulation. The basic trapping principle of the waterwheel plant is the same as the terrestrial Venus flytrap (Dionaea muscipula). However, the two types differ not only with regard to the mediums in which they live, that is water and air respectively, but also in the size, rapidity and movement mechanics of their traps. The researchers believe it is important to establish whether the plants have adapted to catching special types of prey, in order to better understand their ecology and evolution. This knowledge is also key to possible conservation measures, because increasing loss of suitable habitat is threatening the waterwheel plant with extinction.

The scientists undertook comparative analyses of the prey composition of a total of eight different populations of the waterwheel plant in Germany and the Czech Republic. This showed that the prey’s mode of locomotion is irrelevant to Aldrovanda, because besides fast swimming prey, the researchers also often found slow crawling animals such as snails in the traps. The 43 prey taxa identified ranged from tiny water mites to comparatively large mosquito larvae and back swimmers that barely fit into the traps. Likewise, the trap size does not act as a morphological filter for certain prey sizes, as large traps also contained small prey animals (and vice versa). Since the waterwheel plant occurs in highly fragmented habitats, which may be very different in terms of the composition of their animal inhabitants, the diverse diet of Aldrovanda could be an advantage over a stricter prey specialization, the researchers speculate.

The Plant Biomechanics Group at the Botanical Garden of the University of Freiburg has a research focus into the investigation of plant movement principles, especially the fast traps of carnivorous plants. The team has already investigated the Aldrovanda traps in respect to their biomechanics and functional morphology as part of an international research cooperation and have transferred their deformation principle into a biomimetic facade shading, the Flectofold.