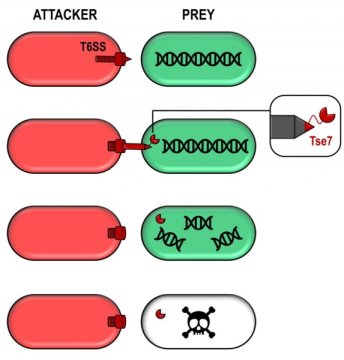 A bacterial toxin that allows an infectious strain of bacteria to defeat its competitors has been discovered by Imperial College London scientists.

The finding provides a better understanding of the mechanisms behind bacterial warfare, which is the first step for the design of improved treatments for microbial diseases.

Bacteria are some of the most abundant organisms on Earth and they are engaged in a relentless fight for the limited food resources available to them. To fend off and eliminate rivals and predators, they have evolved multiple chemical weapons.

Bacterial secretion systems, which can be loaded with bullet-like toxins, are one kind of weapon bacteria use to eliminate their competitors. In a new study, published today in Proceedings of the National Academy of Sciences, Imperial researchers have discovered a new bullet-like toxin produced by Pseudomonas aeruginosa, a bacterium responsible for human diseases such as pneumonia and cystic fibrosis as well as many hospital-acquired infections.

The study, led by Professor Alain Filloux from the Department of Life Sciences, investigated an understudied group of bacterial genes that encode proteins linked to the P. aeruginosa Type 6 secretion system (T6SS). T6SS is a molecular gun responsible for the delivery of multiple toxins which kill or suppress the growth of rival bacteria.

Samples of P. aeruginosa from specific infections are often found to be dominated by a single strain of P. aeruginosa, and the researchers suggest that this newly discovered toxin may help explain why such dominance is possible.

Professor Filloux said: “There is much more to learn about the exact role of T6SS in shaping the composition of bacterial communities in P. aeruginosa infections, which would eventually allow us to use our fundamental understanding of this system to tackle health-related problems.”

Among the T6SS-related genes studied in P. aeruginosa, one was found to encode a protein with an ability to degrade nucleic acids, such as DNA. This protein, which the researchers called Tse7, acts like a toxic bullet, which can be delivered via the T6SS into a competitor cell.

It fits perfectly on the tip of the T6SS gun, making its delivery very efficient. When Tse7 was introduced into different bacteria, it was able to degrade their DNA and ultimately stop their growth, showing its toxic activity.

In the microbial world there is an abundance of different toxins with a variety of functions, from the ones that degrade DNA, like Tse7, to those that cause cell breakdown, by disrupting the essential bacterial membrane of their victims.

However, every bacterium that produces a toxin needs to also somehow protect itself from being destroyed by its own weapon. This is why, along with the toxin, an immunity protein — an antitoxin — is also produced, which makes the toxin-producing bacteria immune to their own weapons. The current study has found that P. aeruginosa possesses a Tse7 immunity protein, called Tsi7, which when introduced to victim cells, protects them from Tse7 toxicity.

The Tsi7 immunity protein was also shown to be very specific to the strain that produces it; that is, different P. aeruginosa strains were found to possess unique versions of Tsi7, which were only protective against the toxin originating from the same strain. This strain specificity of the toxin-immunity pair could explain why samples from P. aeruginosa infections from cystic fibrosis patients tend to be dominated by a single Pseudomonas strain.

Panayiota Pissaridou, a PhD candidate at Imperial and one of the two lead authors in the present study, said: “There are many toxins in P. aeruginosa, which have not yet been studied.” Dr Luke Allsopp, also a lead author on this study, added: “Further research into the T6SS and how it allows bacteria to adapt to different environments is important for understanding the mechanisms that govern clinical infections.”