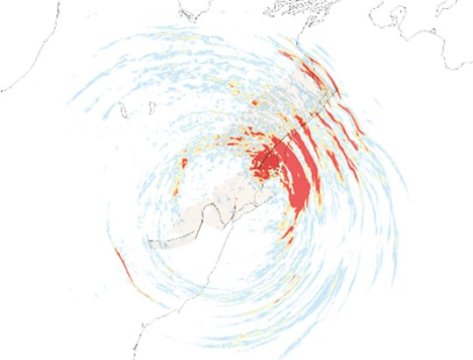 The Kaikoura earthquake in New Zealand in 2016 caused widespread damage. Ludwig-Maximilians-Universitaet (LMU) in Munich researchers have now dissected its mechanisms revealing surprising insights on earthquake physics with the aid of simulations carried out on the supercomputer SuperMUC.

The 2016 Kaikoura earthquake (magnitude 7.8) on the South Island of New Zealand is among the most intriguing and best-documented seismic events anywhere in the world — and one of the most complex. The earthquake exhibited a number of unusual features, and the underlying geophysical processes have since been the subject of controversy. LMU geophysicists Thomas Ulrich and Dr. Alice-Agnes Gabriel, in cooperation with researchers based at the Université Côte d’Azur in Valbonne and at Hong Kong Polytechnic University, have now simulated the course of the earthquake with an unprecedented degree of realism. Their model, which was run on the Bavarian Academy of Science’s supercomputer SuperMUC at the Leibniz Computing Center (LRZ) in Munich, elucidates dynamic reasons for such uncommon multi-segment earthquake. This is an important step towards improving the accuracy of earthquake hazard assessments in other parts of the world. Their findings appear in the online journal Nature Communications.

According to the paper’s authors the Kaikoura earthquake is the most complicated ever recorded and raises a number of important questions. One of its most striking features was that it resulted in the successive rupture of more than 20 segments of a fault network. “Looking at the pattern of surface faults affected by the quake, one finds large gaps of more than 15 km in between them. Up to now, analyses of seismic hazard have been based on the assumption that faults that are more than 5 km apart will not be broken in a single event,” says Gabriel. A second unusual observation was that, although the earthquake began on land, it also resulted in the largest tsunami recorded in the region since 1947. This indicates that the subsurface ruptures ultimately triggered local displacements of the seafloor.

The insights provided by the simulations have now yielded a better understanding of the causes of the sequence of fault ruptures that characterized the earthquake. “This was made possible by the realistic nature of our model, which incorporates the essential geophysical characteristics of fault failure, and realistically reproduces how subsurface rocks fracture and generate seismic waves,” says Gabriel. The model confirmed that the Kaikoura earthquake involved a complex cascade of fault ruptures, which propagated in a zig-zag fashion. Propagation velocities along the individual fault systems were not unusually slow, but the complex geometry of the fault network and delays at the transitions between fault segments led to a tortuous rupture path. While a large amount of tectonic forces accumulating over decades may seem intuitively required to steer an earthquake throughout such complex fault networks, the authors suggest that the required forcing was on the contrary quite weak. “The rupture of such a weakly loaded fault was boosted by very gradual slippage or creep below the faults, where the crust is more ductile and low levels of frictional resistance, promoted by the presence of fluids,” Gabriel explains. “In addition, high rupture velocities generally result in the rapid dissipation of frictional resistance.”

The researchers state that their model could contribute to improving estimates of earthquake hazard in certain areas. Current hazard assessments require careful mapping of the fault systems in the region concerned, and their susceptibility to rupture under seismic stress is then estimated. “Earthquake modeling is now becoming an important part of the rapid earthquake response toolset and for improving long-term building codes in earthquake prone areas by delivering physics-driven interpretations that can be integrated synergistically with established data-driven efforts,” says the first author of the study, PhD student Thomas Ulrich.