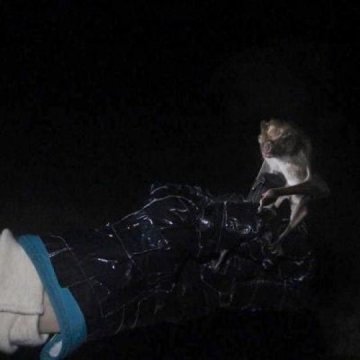 Bartonella are bacteria that cause endocarditis, a potentially life-threatening illness in humans and domestic animals. In Latin America, common vampire bats (Desmodus rotundus) are frequently infected by Bartonella, and their subsistence on blood creates a risk for bacterial transmission from bats to humans and livestock. A study published in PLOS Neglected Tropical Diseases by Daniel Becker at Montana State University in Bozeman, found Bartonella infections in vampire bats are highly prevalent in Peru and Belize, and that Bartonella genotypes are distributed widely, rather than clustered geographically.

Previous studies have suggested that vampire bats may be zoonotic reservoirs of Bartonella infections in humans, but little was known about the bats’ individual risk of infection, the genetic diversity of Bartonella bacteria in bat populations, and how these bacteria may be transmitted among bats or to other species. Over two years, the researchers collected blood, saliva, and fecal samples from vampire bats across Belize and Peru. Samples were then tested to ascertain how many bats were infected. Individual risk factors for infection were identified by analyzing the relationship between bat age, sex, forearm size and reproductive status. Samples testing positive for Bartonella were then subjected to genomic sequencing and phylogenetic analysis to shed light on possible bacteria transmission routes.

67% of tested bats were found to be Bartonella carriers; with the highest risk of infection in large males. Bacterial genotypes were widely distributed across Central and South America, suggesting a limited spatial structure to infection transmission.

The researchers also investigated the how Bartonella might spread between individuals. While Bartonella spp. are often transmitted by biting arthropods, vampire bat saliva and fecal samples were also found to be positive for Bartonella, suggesting the possibility that transmission could occur through bites or environmental contamination. While these preliminary results provide insights about the infection rate among vampire bats and the genetic diversity of bat endemic Bartonella, more research is necessary to further elucidate transmission from bats to humans.

According to the authors, “Given the high rates of vampire bat bites and proximity to humans, and domestic animals, such efforts to verify the possibility and frequency of oral and environmental exposures would elucidate Bartonella transmission dynamics in this common host species and the risks of cross-species transmission.”