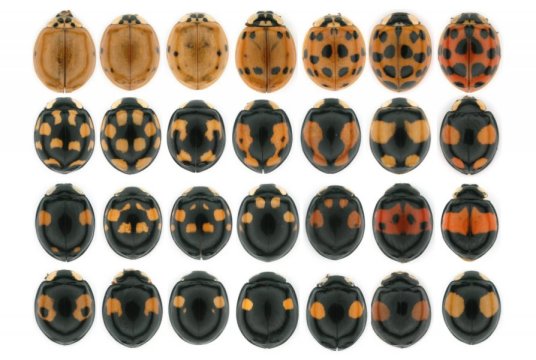 Many ladybirds have attractive color patterns consisting of black and red. This prominent color pattern is thought to function as a warning that indicates to predators that they are very bitter and unpalatable. A research team led by Professor Teruyuki Niimi at the National Institute for Basic Biology in Japan focused on the multicolored Asian ladybird beetle Harmonia axyridis (also known as the harlequin ladybird), which lives mainly in Siberia and East Asia, and shows >200 color patterns within a species. The team has identified a single gene that regulates such highly diverse ladybird color patterns.

Their genetic and genomic analyses in H. axyridis identified a single gene: pannier. The pannier gene was expressed in the black pigmented regions where the red pigment is not deposited. Functional inhibition of the pannier gene during pupal development resulted in the loss of the black color patterns and ectopic red pattern formation in the forewing. Therefore, the pannier gene has dual functions: promotion of black pigmentation and suppression of red pigmentation in the forewing. A similar result was also obtained in the seven-spot ladybird (Coccinella septempunctata), which lives all over the world.

Professor Niimi stated, “The multicolored Asian lady beetle (Harmonia axyridis) shows extraordinary intraspecific variation in wing colour patterns (>200 described colour forms), and seemed to be the best model to elucidate how insects have generated the diverse traits during evolution at the molecular level. In order to investigate the cause of these diverse morphological patterns, we sequenced the genomes of the multicolored Asian ladybeetle (Harmonia axyridis), and the seven-spot ladybird (Coccinella septempunctata) in collaboration with the specialists at the National Institute of Genetics and others.”

In the genomic analyses of ladybird beetles, they found that the DNA sequences of the pannier gene in the multicolored Asian ladybird beetle was greater compared to other holometabolous insects including the seven-spot ladybird which shows a single color pattern. Genomic sequence comparison among ladybird beetles with different color patterns in H. axyridis revealed that the difference in color pattern is associated with the difference in the DNA sequence of the first intron of the pannier gene. In addition, they found traces of repeated chromosomal inversion within the pannier intron. Assistant Professor Toshiya Ando who performed genomic analysis said “Until now, it has not been reported that morphological diversification within a species was associated with repeated inversions within a single developmental gene. Our findings have shed light on intragenic chromosomal inversions as a driving force for morphological evolution of organisms.”