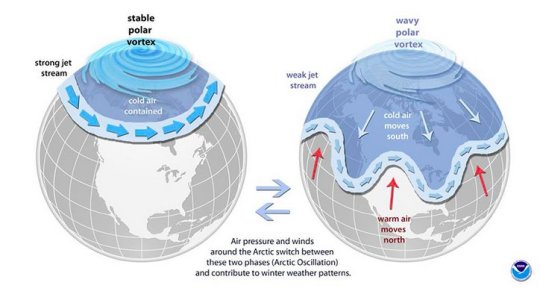 If you can predict the path of the jet stream, the upper atmosphere’s undulating river of wind, then you can predict weather — not just for a week or two, but for an entire season. A new Stanford study moves toward that level of foresight by revealing a physical link between the speed and location of the jet stream and the strength of the polar vortex, a swirl of air that usually hovers over the Arctic.

“The jet stream sets everything,” said Aditi Sheshadri, lead author and assistant professor of Earth System Science in the School of Earth, Energy, & Environmental Sciences (Stanford Earth). “Storms ride along it. They interact with it. If the jet stream shifts, the place where the storms are strongest will also shift.”

The research, published in the Journal of Atmospheric Sciences, identifies two distinct modes in how air flows within the jet stream and the layers of atmosphere that sandwich it.

“These deep vertical structures haven’t been shown before,” Sheshadri said. “It’s something fundamental about the system itself.” Her analysis could help explain the surface weather impacts of an event that occurred in early 2018, when the vortex weakened so much that it ripped in two — a phenomenon that scientists know can blast up to two months of extreme weather into western Europe. Until now, understanding of these interactions has been based on observations and statistical modeling rather than knowledge of their physical foundation.

These modes could be key to predicting the long-term effects of certain environmental changes on Earth’s surface. While air is thought to flow relatively independently within the troposphere and stratosphere in normal winters, depleted ozone, high levels of greenhouse gases, ocean warming, reduced snow cover, and other disturbances can rattle this independence, affecting both the vortex and jet stream in complex ways. Greenhouse gas emissions, for example, can strengthen the vortex while simultaneously boosting waves that propagate up from the troposphere and weaken the vortex as they break.

“We don’t know which of these two effects of increasing greenhouse gases will win out,” Sheshadri said.

To help find answers, Sheshadri’s team set out to understand the climate as a system that responds in a predictable way to known forces, despite internal dynamics that are a mix of random and systematic fluctuations. They took a mathematical theorem used for nearly a century to predict seemingly random behavior in quantum mechanical systems and applied it to data representing Earth’s atmosphere in wintertime.

“We have 35 years of wind data,” Sheshadri said. “Can we say something just from those observations about how the winds will change if, for instance, you increase carbon dioxide? That’s what got this whole thing started.”

Current climate models excel at showing temperature changes throughout the atmosphere’s layers over time and with varying levels of substances like ozone or carbon dioxide. “We’re pretty certain about how the temperature structure of the atmosphere is going to change,” Sheshadri said. “However, if you look at changes in things like wind or rain or snow — anything that’s a dynamical quantity — we really have very little idea of what’s going on.”

And yet, these are some of the most vivid metrics for a changing climate. “No one feels the global mean temperature,” Sheshadri said. “How many times over the next 10 years are we going to have to deal with floods or cold snaps in a particular region? That’s the sort of question this might help answer.”

By revealing the physical processes that underpin some of these dynamic variables, the method developed in this study could also help weed out flaws in climate models.

“The way that we currently do this is that you take a model and you run it forward,” checking the model’s predictions against observed data, Sheshadri explained. But many models built upon the same historic data produce different predictions for the future, in part because they make different assumptions about how the troposphere and stratosphere interact and how the jet stream fluctuates. Until now there has not been a way to check those assumptions against the atmosphere’s actual variability.

“We need to be sure the models are right, and for the right reasons,” Sheshadri said. The new work provides a way to resolve that uncertainty — and to anticipate storms months into the future.