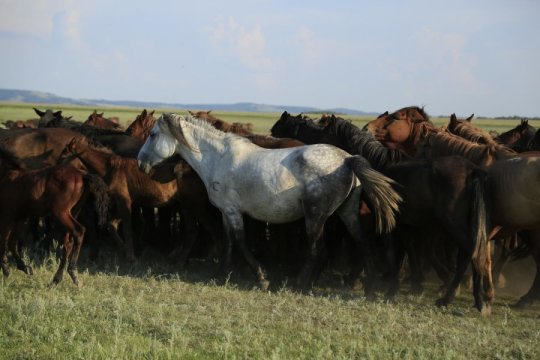 Each year on the first Saturday in May, Thoroughbred horses reach speeds of over 40 miles per hour as they compete to win the Kentucky Derby. But the domestic horse wasn’t always bred for speed. In fact, an international team now has evidence to suggest that the modern horse is genetically quite different from the horses of even just a few hundred years ago.

Their work, appearing May 2 in the journal Cell, constructs the genetic history of the domestic horse across the world over the last 5,000 years by using the largest genome collection ever generated for a non-human organism. The findings identify two new horse lineages that are now extinct and suggest that familiar traits such as speed were only selected for more recently in their history.

“The horse has impacted human history like no other animal,” says Ludovic Orlando, a research director with CNRS and the University of Toulouse and a Professor of Molecular Archaeology at the University of Copenhagen. “If you look at the historical record from the Bronze Age onward, horses are always part of the equation up until very recent times, connecting civilizations and impacting transportation, warfare, and agriculture. Our goal was to understand how humans and their activities transformed the horse throughout history to fit their purposes — and how these changes in biology influenced human history.”

The team responsible for this project consisted of 121 collaborators, including geneticists, archaeologists, and evolutionary biologists from 85 institutions around the world, and examined genome-scale data from 278 horse specimens from across Eurasia over the last 42,000 years.

READ  Research: Bacterial armor could be a new target for antibiotics --

“Such a large collection of data means that we can build a much more precise understanding of horse domestication and management through space and time,” Orlando says. “But it was truly an interdisciplinary effort because of course it takes a lot more than just DNA to understand such a story. We had to integrate all these social, historical, and geographical aspects.”

Overall, the team’s findings suggest that equine history was much more complex than was previously realized. Today, there are only two known lineages of horses, the domestic horse and the Przewalski’s horse. But the researchers here identified two additional now-extinct lineages of horses, one from the Iberian Peninsula and one from Siberia, both of which still existed 4,000-4,500 years ago. “We found two lineages of horses at the far ends of Eurasia that are not related to what we call the domestic horse today, nor to the Przewalski’s horse. They are a sort of horse equivalent of what Neanderthals are to modern humans,” Orlando says.

The researchers also found a major shift in the genetic makeup of horses in Europe and Central Asia in the 7th to 9th centuries and say this shift probably corresponds to Islamic expansions. The horses common in Europe before that time are now only found in regions such as Iceland; the new European horses after that time were much more similar to horses found in Persia during the Sassanid Empire. When the team performed a scan to identify genes that had been selected for in these Persian horses, they found evidence of selection in genes associated with body shape.

READ  Research: In dangerous fungal family's befriending of plants, a story of loss --

“It was a moment in history that reshaped the landscape of horses in Europe. If you look at what we today call Arabian horses, you know that they have a different shape — and we know how popular this anatomy has been throughout history, including in racing horses. Based on the genomic evidence, we propose that this horse was so successful and influential because it brought a new anatomy and perhaps other favorable traits,” he says.

The researchers found that there have been additional significant and recent changes in the domestic horse. Similar selection scans indicate that only in the last 1,500 years did traits such as ambling and speed over short distances become more actively sought. And when they looked at the overall genetic diversity of the domestic horse, the researchers found a sharp decline in the last 200 to 300 years. They believe this decline corresponds with new breeding practices that were introduced with the rise of the concept of “pure” breeds.

“What we picture as a horse today and what we picture as a horse from a thousand years ago or two thousand years ago was likely actually very different. Some of those traits that we are most familiar with are only a modern invention, and in the last few hundred years, we have actually impacted the horse genome a lot more than in the previous 4,000 years of domestication,” says Orlando.

He believes that this research can tell us a lot about both the past and the present. “Our findings show that the past is a lot more diverse than we thought it was and that it cannot be imagined or inferred through modern-day variation. But ancient DNA tells us a lot about today as well, because it teaches us about the consequences of some shifts in breeding practices,” he says. And that, he believes, can also affect the way we think about conservation and modern agricultural practices.

Of course, our understanding of the domestic horse’s history is far from complete. Orlando acknowledges that there are geographic and temporal gaps in his story. Perhaps mostly glaringly, we still don’t know when and or where the horse was domesticated. “Horse domestication is central to human history, and in 2019, we still don’t understand where it started. That’s mind-blowing,” he says.

He looks forward to filling in those blanks. “Whenever I’m asked about what finding I’m most excited about, I always say, the next one. Because this research opens the door for so many possibilities to be studied now.”