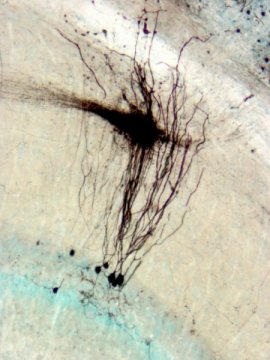 The elephant-nose fish Gnathonemus petersii relies on electricity to find food and navigate through the obstacles riddling its native murky African rivers. On July 11 in the journal Neuron, Columbia University researchers present evidence that the fish’s ability to accurately “see” an “electrical image” of its surroundings requires it to filter out its own electrical interference.

“We needed to determine whether being able to predict its own electrical signals would help the fish better detect environmental cues,” says Nathaniel Sawtell, a neuroscientist at Columbia’s Zuckerman Mind Brain Behavior Institute. “So using both neural recordings and behavioral experiments, we showed that these predictions known as negative images actually do help the fish sense external signals related to hunting prey.”

As an electric fish, the elephant-nose fish has two specialized systems that help it sense its surroundings — a passive system attuned to the minute electric signatures of everything living in its environment, including prey, and an active system that voluntarily emits brief pulses of electricity. The fish uses these electrical pulses to both communicate with other electric fish and sense its environment by painting an “electric image” of it to aid in navigation.

“The fish’s own electrical pulses cause large neural responses that interfere with the passive system,” says Sawtell. “Our work shows how changes in neural connections produce negative images to cancel out this interference.”

While earlier studies speculated that the elephant-nose fish might generate these negative images, no evidence had existed to directly demonstrate their functional importance. But the authors showed that delivering a drug that interfered with the formation of negative images essentially blinded the fish to external electrical signals.

“An important part of this work has been the integration of experimental and theoretical approaches to understanding neural circuits,” says Sawtell. “From here, we’re trying to take the lessons we’ve learned from the electric fish and apply them to related systems, including the mammalian cerebellum and auditory system.”