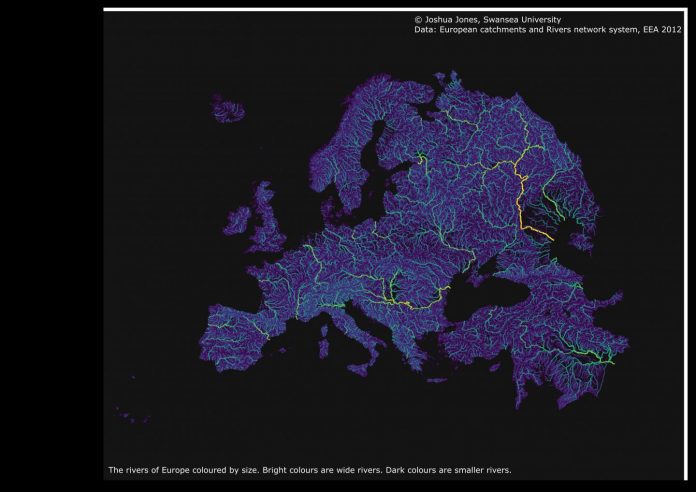 The EU Horizon 2020 AMBER (Adaptive Management of Barriers in European Rivers) project created the first pan-European atlas on river barriers. Politecnico di Milano researchers involved with the AMBER project estimated that there were more than one million barriers, making Europe’s rivers the most fragmented worldwide.

The Pan-European Atlas of In-Stream Barriers provides the most comprehensive overview of river fragmentation in Europe. It contains information on 630,000 barriers including not only large dams, but also hundreds of thousands of smaller weirs, ramps, fords and culverts. However, after walking 2,700 km of streams in 28 countries, AMBER researchers have found that more than one third of barriers are unrecorded, bringing the total to well over 1 million. This scale of river fragmentation is alarming and makes Europe the most fragmented river landscape in the world, with hardly any unfragmented, free-flowing rivers left.

Carlos Garcia de Leaniz, AMBER project coordinator and Professor of Aquatic Biosciences at Swansea University remarks, “Even areas that were considered to be relatively pristine and well connected are in fact impacted by barriers. For example, in the Balkans, our field validation indicates that 80% of barriers do not appear in current inventories, making the fragmentation of these rivers much worse than people thought.”

The atlas data can be used to estimate river fragmentation at various spatial scales. Together with several restoration tools specifically developed by the AMBER consortium, this information can help river basin managers minimize the impacts of barriers. For example, AMBER research indicates that most of the loss of connectivity is typically caused by a relatively small fraction of barriers, so it makes sense to prioritize these. The priority should be to protect the least fragmented rivers and to act on those barriers that cause most of the damage.

Traditionally, river managers have tended to view river fragmentation as being caused solely by large dams, but AMBER researchers have found this is seldom the case. In Europe, over 85% of barriers are weirs and other small structures, not dams. Many of these are out of use, and could be removed as they break river connectivity and block the movement of sediments and organisms. But other barriers provide hydropower, water for irrigation, fishing and leisure opportunities and many other services to society. The challenge is to maximize the benefits of such barriers and to minimize their impacts through adaptive management.

The Environmental Intelligence Lab research group, led by Professor Andrea Castelletti of the Department of Electronics, Information and Bioengineering of Politecnico di Milano, participated in the construction of the Barrier Atlas and its European scale adoption. The group worked with the European Commission Joint Research Centre (JRC). DEIB researchers developed models to monitor sediment connectivity at the basin scale and used drones to collect model calibration data.

Barbara Belletti who led the development of the AMBER Atlas at Politecnico di Milano along with Wouter van de Bund at the Joint Research Centre of the European Commission, commented, “Over 60% of EU freshwater systems are in a poor state in part due to habitat fragmentation. To improve the health of our rivers, we need to reconnect them–our Atlas and tools will support this endeavour.”

The EU Horizon 2020 AMBER project seeks to apply adaptive management to the operation of dams and other barriers in Europe’s rivers to achieve a more sustainable use of water resources and a more efficient restoration of stream connectivity. The project has developed tools and simulations to help water companies and river managers maximize the benefits of barriers and minimize ecological impacts. AMBER promotes habitat connectivity and evaluates the merits of different restoration actions through an evidence-based and a what if simulation approach.

All tools developed by the AMBER consortium will be available on the project website before the end of 2020.