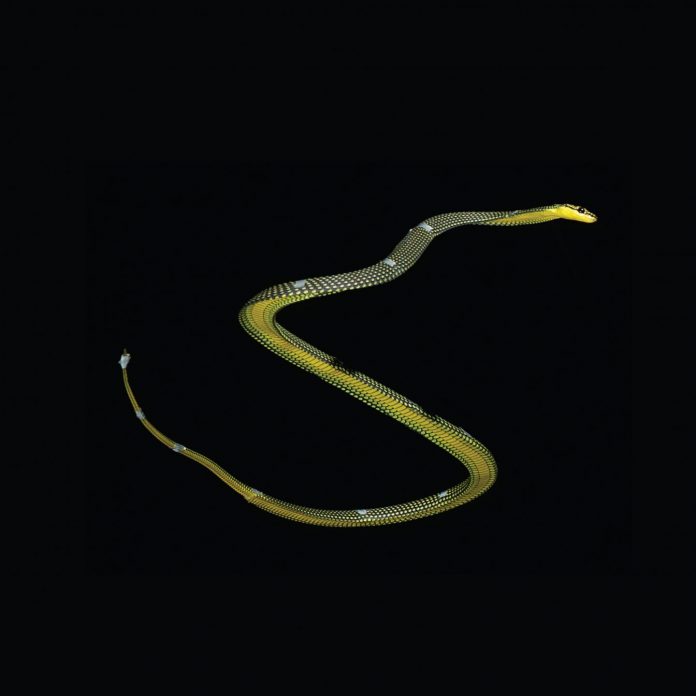 When the paradise tree snake flies from one tall branch to another, its body ripples with waves like green cursive on a blank pad of blue sky. That movement, aerial undulation, happens in each glide made by members of the Chrysopelea family, the only known limbless vertebrates capable of flight. Scientists have known this, but have yet to fully explain it.

For more than 20 years, Jake Socha, a professor in the Department of Biomedical Engineering and Mechanics at Virginia Tech, has sought to measure and model the biomechanics of snake flight and answer questions about them, like that of aerial undulation’s functional role. For a study published by Nature Physics, Socha assembled an interdisciplinary team to develop the first continuous, anatomically-accurate 3D mathematical model of Chrysopelea paradisi in flight.

The team, which included Shane Ross, a professor in the Kevin T. Crofton Department of Aerospace and Ocean Engineering, and Isaac Yeaton, a recent mechanical engineering doctoral graduate and the paper’s lead author, developed the 3D model after measuring more than 100 live snake glides. The model factors in frequencies of undulating waves, their direction, forces acting on the body, and mass distribution. With it, the researchers have run virtual experiments to investigate aerial undulation.

In one set of those experiments, to learn why undulation is a part of each glide, they simulated what would happen if it wasn’t — by turning it off. When their virtual flying snake could no longer aerially undulate, its body began to tumble. The test, paired with simulated glides that kept the waves of undulation going, confirmed the team’s hypothesis: aerial undulation enhances rotational stability in flying snakes.

Questions of flight and movement fill Socha’s lab. The group has fit their work on flying snakes between studies of how frogs leap from water and skitter across it, how blood flows through insects, and how ducks land on ponds. In part, it was important to Socha to probe undulation’s functional role in snake glides because it would be easy to assume that it didn’t really have one.

“We know that snakes undulate for all kinds of reasons and in all kinds of locomotor contexts,” said Socha. “That’s their basal program. By program, I mean their neural, muscular program? — they’re receiving specific instructions: fire this muscle now, fire that muscle, fire this muscle. It’s ancient. It goes beyond snakes. That pattern of creating undulations is an old one. It’s quite possible that a snake gets into the air, then it goes, ‘What do I do? I’m a snake. I undulate.'”

But Socha believed there was much more to it. Throughout the paradise tree snake’s flight, so many things happen at once, it’s difficult to untangle them with the naked eye. Socha described a few steps that take place with each glide ?– steps that read as intentional.

First, the snake jumps, usually by curving its body into a “J-loop” and springing up and out. As it launches, the snake reconfigures its shape, its muscles shifting to flatten its body out everywhere but the tail. The body becomes a “morphing wing” that produces lift and drag forces when air flows over it, as it accelerates downward under gravity. Socha has examined these aerodynamic properties in multiple studies. With the flattening comes undulation, as the snake sends waves down its body.

At the outset of the study, Socha had a theory for aerial undulation he explained by comparing two types of aircraft: jumbo jets versus fighter jets. Jumbo jets are designed for stability and start to level back out on their own when perturbed, he said, whereas fighters roll out of control.

So which would the snake be?

“Is it like a big jumbo jet, or is it naturally unstable?” Socha said. “Is this undulation potentially a way of it dealing with stability?”

He believed the snake would be more like a fighter jet.

To run tests investigating undulation’s importance to stability, the team set out to develop a 3D mathematical model that could produce simulated glides. But first, they needed to measure and analyze what real snakes do when gliding.

In 2015, the researchers collected motion capture data from 131 live glides made by paradise tree snakes. They turned The Cube, a four-story black-box theater at the Moss Arts Center, into an indoor glide arena and used its 23 high-speed cameras to capture the snakes’ motion as they jumped from 27 feet up — from an oak tree branch atop a scissor lift — and glided down to an artificial tree below, or onto the surrounding soft foam padding the team set out in sheets to cushion their landings.

The cameras put out infrared light, so the snakes were marked with infrared-reflective tape on 11 to 17 points along their bodies, allowing the motion capture system to detect their changing position over time. Finding the number of measurement points has been key to the study; in past experiments, Socha marked the snake at three points, then five, but those numbers didn’t provide enough information. The data from fewer video points only provided a coarse understanding, making for choppy and low-fidelity undulation in the resulting models.

The team found a sweet spot in 11 to 17 points, which gave high-resolution data. “With this number, we could get a smooth representation of the snake, and an accurate one,” said Socha.

The researchers went on to build the 3D model by digitizing and reproducing the snake’s motion while folding in measurements they had previously collected on mass distribution and aerodynamics. An expert in dynamic modeling, Ross guided Yeaton’s work on a continuous model by drawing inspiration from work in spacecraft motion.

He had worked with Socha to model flying snakes since 2013, and their previous models treated the snake’s body in parts — first in three parts, as a trunk, a middle, and an end, and then as a bunch of links. “This is the first one that’s continuous,” said Ross. “It’s like a ribbon. It’s the most realistic to this point.”

In virtual experiments, the model showed that aerial undulation not only kept the snake from tipping over during glides, but it increased the horizontal and vertical distances traveled.

Ross sees an analogy for the snake’s undulation in a frisbee’s spin: the reciprocating motion increases rotational stability and results in a better glide. By undulating, he said, the snake is able to balance out the lift and drag forces its flattened body produces, rather than being overwhelmed by them and toppling, and it’s able to go further.

The experiments also revealed to the team details they hadn’t previously been able to visualize. They saw that the snake employed two waves when undulating: a large-amplitude horizontal wave and a newly discovered, smaller-amplitude vertical wave. The waves went side to side and up and down at the same time, and the data showed that the vertical wave went at twice the rate of the horizontal one. “This is really, really freaky,” said Socha. These double waves have only been discovered in one other snake, a sidewinder, but its waves go at the same frequency.

“What really makes this study powerful is that we were able to dramatically advance both our understanding of glide kinematics and our ability to model the system,” said Yeaton. “Snake flight is complicated, and it’s often tricky to get the snakes to cooperate. And there are many intricacies to make the computational model accurate. But it’s satisfying to put all of the pieces together.”

“In all these years, I think I’ve seen close to a thousand glides,” said Socha. “It’s still amazing to see every time. Seeing it in person, there’s something a little different about it. It’s shocking still. What exactly is this animal doing? Being able to answer the questions I’ve had since I was a graduate student, many, many years later, is incredibly satisfying.”

Socha credits some of the elements that shaped the real and simulated glide experiments to forces out of his control. Chance led him to the indoor glide arena: a few years after the Moss Arts Center opened, Tanner Upthegrove, a media engineer for the Institute for Creativity, Arts, and Technology, or ICAT, asked him if he’d ever thought about working in the Cube.

“What’s the Cube?” he asked. When Upthegrove showed him the space, he was floored. It seemed designed for Socha’s experiments.

In some ways, it was. “Many projects at ICAT used the advanced technology of the Cube, a studio unlike any other in the world, to reveal that which could normally not be seen,” said Ben Knapp, the founding director of ICAT. “Scientists, engineers, artists, and designers join forces here to build, create, and innovate new ways to approach the world’s grandest challenges.”

In one of the center’s featured projects, “Body, Full of Time,” media and visual artists used the space to motion capture the body movements of dancers for an immersive performance. Trading dancers for snakes, Socha was able to make the most of the Cube’s motion capture system. The team could move cameras around, optimizing their position for the snake’s path. They took advantage of latticework at the top of the space to position two cameras pointing down, providing an overhead view of the snake, which they’d never been able to do before.

Socha and Ross see potential for their 3D model to continue exploring snake flight. The team is planning outdoor experiments to gather motion data from longer glides. And one day, they hope to cross the boundaries of biological reality.

Right now, their virtual flying snake always glides down, like the real animal. But what if they could get it to move so that it would actually start to go up? To really fly? That ability could potentially be built into the algorithms of robotic snakes, which have exciting applications in search and rescue and disaster monitoring, Ross said.

“Snakes are just so good at moving through complex environments,” said Ross. “If you could add this new modality, it would work not only in a natural setting, but in an urban environment.”

“In some ways, Virginia Tech is a hub for bio-inspired engineering,” said Socha. “Studies like this one not only provide insight into how nature works, but lay the groundwork for design inspired by nature. Evolution is the ultimate creative tinkerer, and we’re excited to continue to discover nature’s solutions to problems like this one, extracting flight from a wiggling cylinder.”