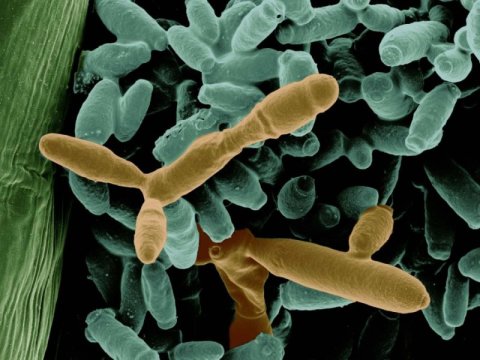 A sticky drop of nectar clinging to the tip of a hummingbird’s beak drips into the next flower the bird visits. With that subtle change, the microbes within that drop are now in a new environment, teeming with other microbes. This small example of species forced to coexist in the real world has helped the Fukami Lab at Stanford University unravel the relative importance of two theories scientists have had about how species can live together.

It turns out that a less popular theory, having to do with the way organisms respond and contribute to environmental fluctuations, likely plays a bigger role than ecologists had thought — this according to the study of the nectar-dwelling yeast of Stanford’s Jasper Ridge Biological Preserve. The work, published June 11 in Proceedings of the National Academy of Sciences, could influence how scientists model the effects of climate change on organisms.

“This particular experiment was motivated by basic curiosity about how species coexist,” said Tadashi Fukami, associate professor of biology in the School of Humanities and Sciences. “We experimented with nectar-colonizing yeasts because we had gathered data about them in the wild, such as hummingbirds visits, interactions with flowers, effects of resources. This way we can design lab experiments that have a clear natural context.”

From theory to reality

Two mechanisms have been proposed to explain how species coexist in variable environments, called the storage effect and relative nonlinearity. The storage effect holds that species can coexist if they can store gains for lean times and their lean times don’t overlap, which means they are mostly competing with individuals belonging to their own species for resources during favorable times. The concept of relative nonlinearity maintains that coexistence can occur when one species thrives off fluctuation in resources, the other thrives off stability in resources, and each species’ use of resources contributes to the state — fluctuation or stability — that benefits the other.

Andrew Letten, senior author of the paper, led the study as a postdoctoral fellow in the Fukami Lab. The goal was to understand each mechanism’s relative importance to coexistence. He was inspired by a paper led by a theoretical ecologist at Cornell University, which outlined a new method for quantifying the storage effect through statistical simulations.

“Up until that paper, there was no realistic means of quantifying the relative contribution of the two mechanisms,” said Letten, who is now a postdoctoral fellow at the University of Canterbury in New Zealand. “When I read it, I literally felt giddy because it was so serendipitously tailored to what we were already doing, but enabled us to take it so much further.”

By creating thousands of microcosms, each growing one species of nectar yeasts, the researchers gathered high-resolution data about the complex ways in which the yeasts respond to environmental conditions. Next, they used those data to create scenarios where the yeasts grew in pairs and applied the new method to disentangle the influence of the storage effect from that of relative nonlinearity on the yeasts’ coexistence.

“The idea is, you can mathematically model these coexistence mechanisms, knock them out in the simulations, and then that shows you how those species grow without that mechanism,” explained Po-Ju Ke, graduate student in biology and co-author on the paper. “For example, relative nonlinearity relies on fluctuations in amino acids in nectar, a primary resource for yeast growth, so we simulated a stable level of amino acids to remove the influence of that mechanism.”

Lastly, the researchers compared their simulated results with the results of experiments where two species were grown together. This work is the first to experimentally tease apart the two mechanisms in real organisms and it agreed with the simulations 83 percent of the time.

Looking at their findings, the big surprise was that there were instances where a lack of relative nonlinearity led to one species dying out. This contradicts a common assumption among ecologists.

“Storage effect, maybe because it’s an older concept and more intuitive and easier to get data on, has always been assumed to be the main mechanism,” said Fukami. “We found they both can be important, but the main finding is that relative nonlinearity is much more important than most ecologists assumed.”

Cell and molecular biology often concentrates on studying a particular pathway in intricate detail, whereas ecology tends to focus on larger systems, studying them holistically. In their current work, the Fukami Lab is pursuing research that can apply to both levels.

“As ecologists, we are working to understand holistically how these yeasts are interacting — in the world, with pollinators, with each other, in the nectar — but we can also use the tools that cell biologists have developed to study baker’s yeast to study nectar yeasts in order to gain more precise ecological understanding,” said Callie Chappell, a graduate student in the Fukami Lab and lead author of a different paper about developing a general ecological theory using nectar yeasts as new model organisms.

In addition to the fundamental insights into how species can survive together with few resources, the research team hopes that the experiments detailed in the current work will cause ecologists to reconsider how climate change may affect species. Climate change will lead to increased fluctuation in the environment, such as severe weather events, and this work shows that multiple mechanisms of species coexistence in fluctuating environments must be considered simultaneously to predict the fate of species under climate change.