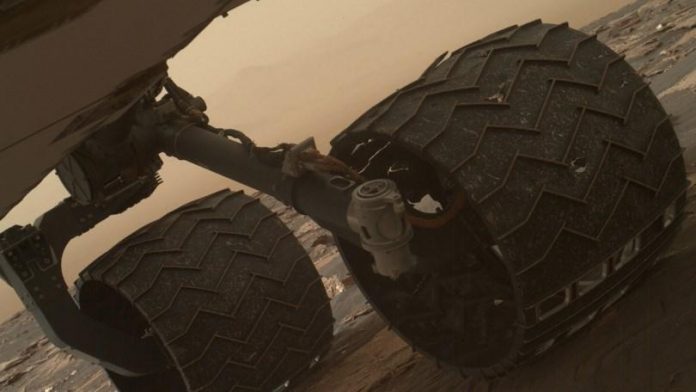 NASA has reported that two small breaks have been detected in the aluminum wheels of the Curiosity Mars rover.

Curiosity has breaks in the rover’s left middle wheel that appear to have been caused by simple wear and tear. It has driven a total of 9.9 miles since the mission’s August 2012 landing on Mars. The rover only needs to go another 3.7 miles to complete its mission.

“All six wheels have more than enough working lifespan remaining to get the vehicle to all destinations planned for the mission,” Jim Erickson, Curiosity’s project manager at NASA’s Jet Propulsion Laboratory, said in a press statement. “While not unexpected, this damage is the first sign that the left middle wheel is nearing a wheel-wear milestone.”

Curiosity has already driven well over that fraction of the total distance needed to get to the most important points of scientific interest on Mars’ Mount Sharp. The rover is currently climbing to sequentially higher and geologically younger layers of Mount Sharp to investigate how the Red Planet’s ancient climate changed billions of years ago.

During Curiosity’s first year on Mars, the mission succeeded at its main goal by finding that the region once offered environmental conditions favorable for microbial life. The rover discovered new geological evidence that liquid water was flowing on the Red Planet in the distant past.

In January, scientists think the rover discovered three-billion-year-old mud cracks, meaning the planet was likely covered in water at that time. This means conditions on Mars led to long-lived ancient freshwater Martian lake environments, which included all of the key chemical elements needed for life as we know it.

In December, Curiosity found numerous organic molecules “all over” the Red Planet in samples it drilled out of rocks.