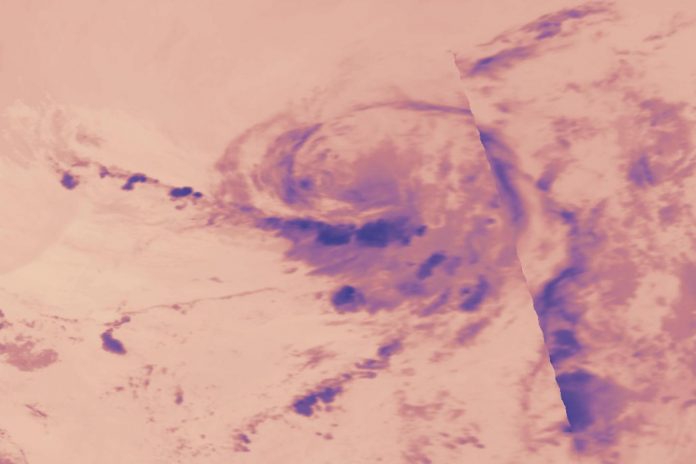 NASA’s Terra satellite provided a night-time look at what is now Post-Tropical Storm Dolly in the Northern Atlantic Ocean. Terra found that all of Dolly’s clouds were on one side of the storm as the storm weakened further.

At 11 a.m. EDT (1500 UTC), the NHC issued their final advisory on Post-Tropical Storm Dolly as the storm weakened to a remnant low-pressure area. The center of Post-Tropical Cyclone Dolly was located near latitude 42.5 north, longitude 57.8 west. That is about 370 miles (595 km) southwest of Cape Race Newfoundland, Canada. Maximum sustained winds are near 35 mph (55 kph) with higher gusts.

The estimated minimum central pressure is 1007 millibars. The post-tropical cyclone is moving toward the northeast near 16 mph (26 kph) and this general motion is expected to continue through tonight.

In the early morning hours of June 24, the Moderate Resolution Imaging Spectroradiometer or MODIS instrument that flies aboard NASA’s Terra satellite captured an infrared image of Post-Tropical Cyclone Dolly’s brightness temperatures. Brightness temperature is actually a measure of the photons seen in the 11-micron wavelength by the MODIS instrument aboard Terra. They are presented in units of temperature. The infrared image provided temperature data that revealed the coldest, highest clouds were about 213.8 Kelvin (minus 76.2 degrees Fahrenheit/minus 60.1 degrees Celsius). Those areas indicated the strongest thunderstorms within the low-pressure area and were all displaced to the south of the center.

Therefore, the low-pressure area is forecast to gradually spin down through Wednesday [June 24] night. It will likely open to an elongated area of low pressure known as a surface trough sometime on Thursday as it continues to move northeastward.

NASA’s Terra satellite is one in a fleet of NASA satellites that provide data for hurricane research.

Tropical cyclones/hurricanes are the most powerful weather events on Earth. NASA’s expertise in space and scientific exploration contributes to essential services provided to the American people by other federal agencies, such as hurricane weather forecasting.