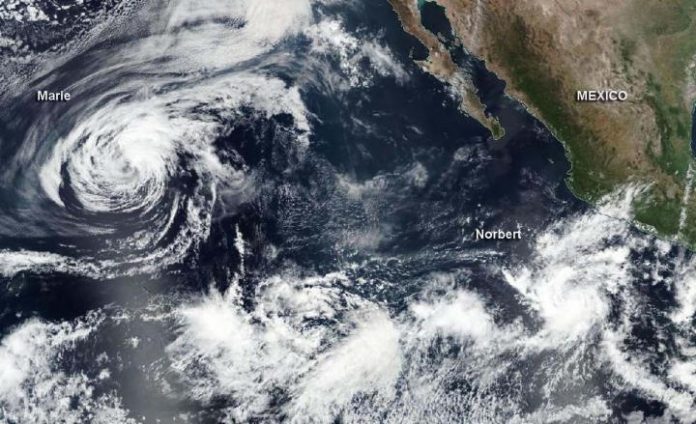 NASA-NOAA’s Suomi NPP satellite passed over the Eastern Pacific Ocean and captured the birth of a depression that became Tropical Storm Norbert while Marie continued weakening while headed toward the Central Pacific.

NOAA’s National Hurricane Center (NHC) noted, “The associated deep convection has also become more organized and convection has persisted over the low-level center since early this morning. In addition, a banding feature has also developed over the western portion of the circulation. Based on these trends, advisories have been initiated for Tropical Depression 19E.”

The same VIIRS visible image also caught a weakening Tropical Storm Marie as it continued toward the Central Pacific Ocean. The Suomi NPP image showed that deep convection and building thunderstorms associated with Marie had all but dissipated and what was left of it was located over 120 nautical miles away from the exposed low-level center of the cyclone (as a result of wind shear).

By 5 a.m. EDT on Oct. 6, Tropical Depression 19E strengthened into a tropical storm and was re-dubbed Norbert. At 11 a.m. EDT, Marie was barely hanging onto tropical storm status and fading quickly.

At 11 a.m. EDT (1500 UTC) on Oct. 6, the center of Tropical Storm Norbert was located near latitude 14.2 degrees north and longitude 106.6 degrees west. That is 365 miles (585 km) south-southwest of Manzanillo, Mexico. Norbert is moving toward the northwest near 7 mph (11 kph). A slower northwestward motion is expected until tonight. The system is forecast to meander thereafter through midweek. Maximum sustained winds are near 45 mph (75 kph) with higher gusts. Some slow strengthening is possible over the next few days. The estimated minimum central pressure is 1002 millibars.

At 11 a.m. EDT (1500 UTC), the center of Tropical Storm Marie was located near latitude 22.1 degrees north and longitude 135.1 degrees west. Marie is moving toward the west-northwest near 9 mph (15 kph), and this general motion with some decrease in forward speed is expected during the next day or so, followed by a turn toward the west late Wednesday or early Thursday.

Maximum sustained winds have decreased to near 45 mph (75 kph) with higher gusts. Gradual weakening is forecast during the next 48 hours, and Marie is forecast to become a remnant low-pressure area by tonight and a trough of low pressure in a few days.

NASA’s Earth Observing System Data and Information System (EOSDIS) Worldview application provides the capability to interactively browse over 700 global, full-resolution satellite imagery layers and then download the underlying data. Many of the available imagery layers are updated within three hours of observation, essentially showing the entire Earth as it looks “right now.”

Hurricanes/tropical cyclones are the most powerful weather events on Earth. NASA’s expertise in space and scientific exploration contributes to essential services provided to the American people by other federal agencies, such as hurricane weather forecasting.

For more than five decades, NASA has used the vantage point of space to understand and explore our home planet, improve lives and safeguard our future. NASA brings together technology, science, and unique global Earth observations to provide societal benefits and strengthen our nation. Advancing knowledge of our home planet contributes directly to America’s leadership in space and scientific exploration.