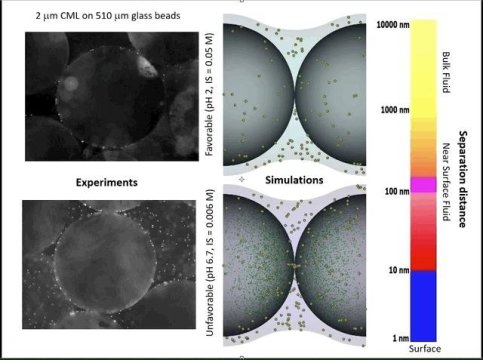 When bacteria and viruses get into well water and make people sick, often the contamination comes after heavy rain or flooding. In 2000, more than 2,300 people in Walkerton, Ontario, got sick when, after unusually heavy rains. E. coli bacteria found their way to drinking water wells. Seven people died.

The reason appears straightforward — the extra groundwater sweeps the bacteria towards the wells. But at the microscopic level, the issue is more complicated and mysterious. University of Utah geoscientist William Johnson studies how contaminants — including bacteria and viruses — move through groundwater. After years of working on this problem, Johnson has found an answer that could help water managers better prepare for and respond to outbreaks caused by rain and floods.

The answer involves chemistry, physics. . . and a little bit of decorative nanoscience.

Johnson and his colleagues from Columbia University and from Ecuador published their work today in Environmental Science & Technology and were supported by the National Science Foundation.

Groundwater scientists know that to predict how far or how fast a contaminant will move, they first have to understand how well that contaminant sticks to sediment grains along the way. Many contaminants, such as nitrate or arsenic, are small molecules made up of just a few atoms each. But suspended particles (called colloids) including viruses, bacteria and protozoa are thousands to millions of times larger than molecules. The size difference makes molecules and colloids respond differently to the forces around them, in the same ways that mosquitos and blimps differ in how haphazard their movements are and in their abilities to hide from wind. The actual forces at play between contaminants and sediment surfaces are related to the electrostatic forces between balloons and hair and the van der Waals forces that hold geckos onto ceilings, which are far stronger for colloids than molecules. Although scientists have a good idea about how molecule-size contaminants move through groundwater, the behavior of colloids is more difficult to pin down because of the size difference.

Because large colloids have limited random motion, their likelihood of hitting sediment grain surfaces in groundwater is actually predictable, similarly to predicting the trajectory of swimmers ejected from a raft in a rapid boulder-filled stream. Some colloids float right through while others, the ones that find themselves on a course headed directly to a boulder, will likely intercept the boulder.

But intercepting the boulder is half the trick of getting out of the water, since after finding a landing spot, a swimmer (or colloid) has to “stick the landing.” If the colloid and the sediment have opposite electrical charges, the colloids stick when they hit the surface, and their concentrations in the groundwater are predictable since they decrease exponentially with distance from the contamination source.

But in the environment, conditions are usually unfavorable to attachment. Both surfaces tend to be negatively charged and repel each other. Under these conditions, Johnson says, the colloid concentrations have screwy relationships with distances from their source that have, until now, made prediction of transport distances all but impossible.

When conventional measurements of surface properties are used in existing colloid attachment theory, “theory judges that no-one sticks the landing,” Johnson says. “Nothing should ever attach under environmental conditions.”

But particles do attach. Sediment can be an effective filter, as shown by many laboratory experiments and field experiments over the past decades. For example, Johnson and his students have run experiments in Ecuador where they’ve shown that excavating channels adjacent to mining-impacted rivers coaxes water flow through the gravel bank, which removes up to 95 percent of mercury.

Engineering colloid removal could help protect other water resources as well, but such engineering will require accurate prediction of whether “sticking the landing” will occur. So, what makes some things stick to sediment (heavy metals in Ecuador) but some things not (bacteria after heavy rains)? Here’s where decorative nanoscience come into the story.

For more than two decades, researchers knew that colloid attachment theory was imperfect because the theory treated both the colloid and the surface as a bulk substance, with the same properties all over. At the nanoscale, though, there’s tremendous variation across the surfaces, both in shape and in chemistry. About 10 years ago, researchers at the University of Massachusetts developed a simpler way to represent areas of varying properties on surfaces as akin to decorations on an Easter egg or patches of color on an impressionist painting.

Johnson, his graduate students and colleagues took the concept farther starting in 2014 to try to match this “decorative” theory to experiments of colloids moving through sediments. Colloids and surfaces, according to the decorative theory, interact over a limited zone of interaction that expands with increased colloid size and expands with decreased ionic strength — the concentration of dissolved ions in the water.

Sticking the landing depends on whether attractive surface domains fill the majority of the zone of interaction, making the interaction net attractive. Amid the balance of attractive decoration size, colloid size, ionic strength and water velocity, the new theory shows how colloids can stick. By varying colloid size, ionic strength and water velocity, Johnson’s group found a representation of the “decorations” that explains colloid attachment under environmental conditions.

But other phenomena also emerged from simulations that now incorporated “decorated” sediments — phenomena that he and colleagues explored in their new paper. Some colloids attach rapidly and some attach slowly as they sniff around for spots on sediments onto which they can stick their landing, Johnson’s simulations show. They also show a range of “residence times” for colloids as they hang around a sediment surface.

Notably, a potential explanation of the relationship between heavy rainfall and disease outbreak in groundwater also emerges from the simulations. Groundwater naturally has a higher ionic strength than fresh rain water due to underground water-rock chemistry. But during heavy rain, groundwater can shift to lower ionic strength. The zone of colloid-surface interaction expands, which can flip the overall interaction from attractive to repulsive. “You reduce the ionic strength like you would in heavy rainfall,” Johnson says. “The zone of interaction expands beyond the attractive nanoscale “decoration,” the interaction flips from net attractive to net repulsive, and off the thing pops.” Now, Johnson says, water managers have more tools to prevent disease outbreaks like the one in Ontario. For example, “we had no transport equations to guide how far you should put a septic system from a drinking water well,” Johnson says. Environmental professionals sometimes add particles of carbon or iron to groundwater to enhance cleanup of contamination. “They have had no practical design guidance because the theory has failed until recently,” Johnson adds. “We now have predictive tools to optimize the fluid velocity to deliver iron or carbon particles to their target.”

Johnson is excited to see the convergence of theory and experimental evidence in this paper, advancing a field that he has been working in for years. “We’ve backed out a characteristic that is likely representative. Things that we observe at larger scales emerge from representing phenomena at the nano to pore scale,”he says. “To me, that’s really satisfying.”