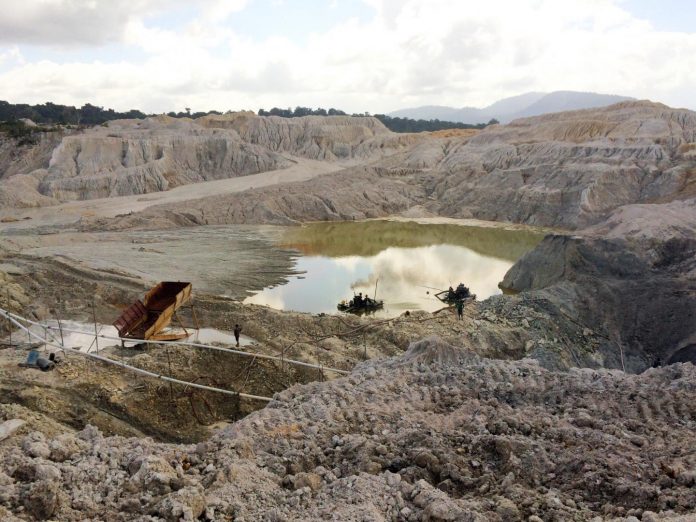 Gold mining significantly limits the regrowth of Amazon forests, greatly reducing their ability to accumulate carbon, according to a new study. The researchers warn that the impacts of mining on tropical forests are long-lasting and that active land management and restoration will be necessary to recover tropical forests on previously mined lands.

Gold mining has rapidly increased across the Amazon in recent years, especially along the Guiana Shield, where it is responsible for as much as 90% of total deforestation. The Shield encompasses Guyana, Suriname, French Guiana, Venezuela and small parts of Colombia and northern Brazil, and its forests hold roughly twenty billion tonnes of aboveground carbon in its trees.

The ability of tropical forests to recover from gold mining activities has remained largely unquantified. Now, an international study led by the University of Leeds is the first to provide detailed field-based information on the regeneration of forests in Guyana after gold mining, and the first ground-based estimate of carbon sink lost as a result of gold mining activities across the Amazon.

The team’s findings, published in the Journal of Applied Ecology, found that forest recovery rates on abandoned mining pits and tailing ponds are amongst the lowest ever recorded for tropical forests. At some sites there was nearly no tree regeneration even after three to four years since mining had stopped.

They estimate that mining-related deforestation results in the annual loss of over two million tons of forest carbon across the Amazon. The lack of forest regrowth observed following mining suggests that this lost carbon cannot be recovered through natural regeneration.

Lead author Dr Michelle Kalamandeen, began this research as a postgraduate researcher in the School of Geography at Leeds she is now a postdoctoral researcher at Cambridge University. She said: “This study shows that tropical forests are strongly impacted by mining activities, and have very little capacity to re-establish themselves following mining.

“Our results clearly show the extraction process has stripped nitrogen from the soil, a critical component to forest recovery, and in many cases directly contributed to the presence of mercury within neighbouring forests and rivers. Active mining sites had on average 250 times more mercury concentrations than abandoned sites.

“Not only does this have serious consequences for our battle against global warming by limiting Amazonian forests’ ability to capture and store carbon, but there is also a larger implication of contaminating food sources especially for indigenous and local communities who rely on rivers.

“A positive finding from this study shows that overburden sites, areas where topsoil is deposited during the mining process, recorded similar recovery rates as other Central and South American secondary tropical forests abandoned after agriculture or pasture.

“Active management and enforcement of laws is clearly needed to ensure recovery and to safeguard communities and there are methods available, such as replacing the soil using the overburdens at abandoned sites. But there is an urgent need for large-scale recovery management to be tested and implemented.

“We could be facing a race against the clock. The current crisis is significantly increasing the demand for gold, given its perceived role as an economic stabiliser. With current gold price more than US$1700 per ounce and estimated to reach US$2000-3000 in the coming months, many artisanal and small-scale miners are already rapidly responding to this increase in pricing, and the weakening of environmental laws and policies as we’ve seen in Brazil, leading to further deforestation in the Amazon.”

Their results suggest that forest recovery is more strongly limited by severe mining-induced depletion of soil nutrients, especially nitrogen, rather than by mercury contamination. The high rate of mercury does however have serious implications for negative impacts on food security, water supply and local biodiversity.

“This research provides support to local and national governance structures to critically approach policy implementation and development for land management, including how and where mining occurs, and more stringent monitoring and action for forest recovery. It shows that carefully planned active restoration projects will be critical in this regard.

“But responsibility lies beyond remediation efforts to mitigate the damage done. Investors and consumers alike need increased awareness and accountability of the environmental footprints of gold mining.”

The Guyana Geology and Mines Commission (GGMC) who supported the fieldwork are optimistic that the results from this research will help in making more informed decisions for their reclamation policies and programmes, monitoring and enforcement.

Mr Newell Dennison, Commissioner of the GGMC said: “The research results showed two important aspects: that overburden areas recovered relatively well and there was limited recovery in mining pits and tailing ponds. The latter being areas where we need improved management. The more data we can accumulate for recovery of secondary forests in mined out areas, the better we are all positioned for the implementation of effective programmes and operations that aid in the recovery of our rainforests. We look forward to working with Dr Kalamandeen and her team in the future.”

The Guyana Forestry Commission (GFC) expressed gratitude and appreciation to the research team for the important and impressive empirical work done in [this] paper.

Mr Gavin Agard, Commissioner of the GFC said: “We expect that this scientific work has greatly improved Guyana’s baseline and understanding of the forest degradation impacts of mining with respect to biomass recovery and sets a foundation for more dynamic, focused studies to advise planning and policy for improving secondary forest growth and restoring biomass capacity.

“The findings and recommendations from this study will significantly impact policy and management strategies for forest restoration and rehabilitation in mined-out areas, which is a key objective for Guyana under the Paris Agreement of the UNFCCC.

“The contribution of deforestation and degradation to climate change cannot be ignored, and thus we welcome the contributions of this research team to build and improve our communal knowledge and understanding of our changing forests as we continue to pursue the highest standards of sustainable forestry in Guyana.”

Images along with captions and credits are available: https://drive.google.com/drive/folders/1r8aoBBt-TJRFnKkkSdpiP84RLjYEKvXU?usp=sharing

The University of Leeds is one of the largest higher education institutions in the UK, with more than 38,000 students from more than 150 different countries, and a member of the Russell Group of research-intensive universities. The University plays a significant role in the Turing, Rosalind Franklin and Royce Institutes.

We are a top ten university for research and impact power in the UK, according to the 2014 Research Excellence Framework, and are in the top 100 of the QS World University Rankings 2021.

The University was awarded a Gold rating by the Government’s Teaching Excellence Framework in 2017, recognising its ‘consistently outstanding’ teaching and learning provision. Twenty-six of our academics have been awarded National Teaching Fellowships – more than any other institution in England, Northern Ireland and Wales – reflecting the excellence of our teaching. ?http://www.leeds.ac.uk