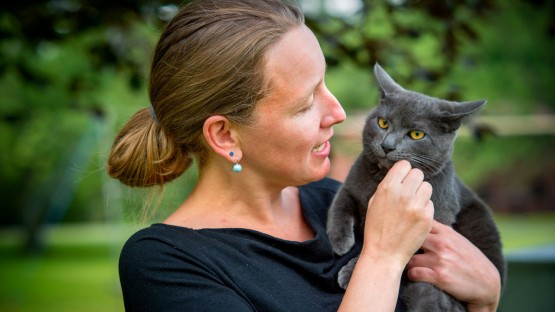 From an early age, Dr. Gerlinde Van de Walle wanted to be a veterinarian. Growing up with cats in suburban Ghent, Belgium, she aimed to become a feline practitioner specializing in cancer.

But during her veterinary studies at Ghent University, Van de Walle realized “instead of just treating the patient, it would also be very satisfying to do the research needed to improve the treatment options being used in veterinary medicine.”

This passion to improve veterinary care led Van de Walle in 2013 to join the Baker Institute for Animal Health, part of Cornell’s College of Veterinary Medicine. Now an associate professor of microbiology and immunology, Van de Walle’s lab studies diverse issues in animal health, ranging from viruses and stem cells in companion and livestock animals, to mammary cancer (or the lack thereof) in various mammals.

“I have a hard time focusing on just one topic,” says Van de Walle, who earned a doctorate in veterinary virology. “I’m so motivated and interested in these problems. And because veterinary medicine covers more than just one species, there’s so much to investigate.”

In one of her current veterinary virology projects, Van de Walle focuses on the spread and progression of a new equine parvovirus she discovered in 2018 with Dr. Thomas Divers, the Rudolph J. and Katharine L. Steffen Professor of Veterinary Medicine. Van de Walle’s group recently confirmed that the virus is the source of Theiler’s disease, a fatal liver disease in horses. The virus had been known to spread through equine biologic products, such as tetanus antitoxins; Van de Walle discovered that the virus can also be transmitted orally. This work has received Cornell support from the Harry M. Zweig Memorial fund for Equine Research and more recently, the Cornell Center for Immunology, as well as a grant from the U.S. Department of Agriculture (USDA).

“Perhaps our lab can be an example for upcoming generations that it is possible to be successful in basic veterinary research, especially in an environment with strong internal funding opportunities, such as Cornell.”

This finding will be crucial to developing vaccines, diagnostic tests or treatments for the disease. In 2019, peers highlighted the findings as one of the “Best Large Animal Internal Medicine Papers of the Year” at the American College of Veterinary Internal Medicine’s annual forum. And the work prompted the USDA to issue new regulations to ensure equine biologic products are virus-free.

“This is expected to greatly improve the safety of antitoxins, plasma transfusions and blood transfusions, which are frequently used in equine medicine,” Van de Walle says.

In a different project in horses, Van de Walle’s lab is studying stem cells called mesenchymal stromal cells (MSCs) that assist in healing wounds, including those that are infected. In a recent featured paper in the journal Stem Cells Translational Medicine, her team showed that MSCs from horses secrete protein-busting enzymes that break apart bacterial matts called biofilms.

“These bacteria are surrounded by proteins, which protect them from antibiotics like a shield,” says Van de Walle. Without the shield, antibiotics are more effective against bacteria, including MRSA, a drug-resistant bacteria acquired by people in hospitals and a growing concern in equine medicine as well.

Van de Walle’s team also aims to find out why some mammals – including cats, dogs and humans – have high rates of breast or mammary cancer, while others – such as horses, pigs, cows and some wild carnivores – almost never develop the disease. Using tissue from humans, rodents and a range of domestic and wild animals, they’ve discovered differences in gene regulation between high- and low-risk species. They also identified defense mechanisms in mammary cells from horses and cows that kill cancerous cells.

Despite the tremendous potential for developing new diagnostic tests and therapies for breast/mammary cancer, finding federal funding has been challenging for Van de Walle; funding agencies are not used to seeing comparative models for this type of research. Cornell has helped fill the funding gap, with a 2020 Schwartz Research Fund for Women and Other Underrepresented Faculty in the Life Sciences. The award will help her develop a new mouse model for comparing mammary cell behavior across different mammal species, which will provide the additional data needed to reapply for federal funding.

“I’m always very proud of my people and what we accomplish here,” Van de Walle says. “Perhaps our lab can be an example for upcoming generations that it is possible to be successful in basic veterinary research, especially in an environment with strong internal funding opportunities, such as Cornell.”