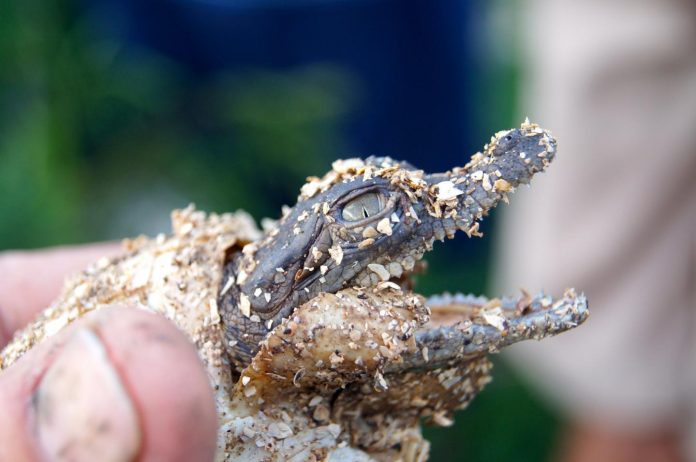 A genetic analysis of the American crocodile (Crocodylus acutus) has re-established our understanding of its population structure, aiding its conservation. The collaborative study spanning seven countries and led by the Wildlife Conservation Society and University of Bristol researchers is published in PLOS ONE.

The American crocodile is widespread across the American continent (from South Florida to Venezuela, across the Greater Antilles, and from Mexico to Ecuador). Successful due to its ability to thrive within brackish and saltwater environments. Efforts to conserve the crocodile species have existed since 1975 when their status was set to vulnerable on the IUCN (International Union for Conservation of Nature) red list. However, although conservation efforts have been put in place, the American crocodile faces further threats including habitat degradation due to coastal development.

Replenishing these populations requires understanding of population structures through genetic analysis, which can elaborate on the evolution of the species’ distribution. Gaining more understanding on how a species has come to be distributed so widely and how populations can differentiate genetically, can inform regions how best to manage their populations.

The study reflected a regional collaborative effort, where DNA sampling occurred across seven countries including Venezuela, Jamaica and Cuba. There has been ongoing discussion on how these regional populations of C.acutus are similar. However, the study’s results found that populations in Northern, Central and Southern America’s and Great Antilles differed genetically. There were similarities found between Costa Rica and Jamaican populations. In Venezuela, they identified three new haplotypes, which are closely related genes that help scientists identify an origin of distribution.

Researchers believe that the mating with different species could have contributed to this distribution, also known as hybridisation. Crocodiles hybridise easily, contributing to their ability to survive since the prehistoric era. Additionally, in Florida genetic analysis showed there had been a case of unintentional translocation, where the species had been moved from a different location over time. This had been flagged by previous research, where crocodiles with haplotypes from Central and South America had been transported to Florida, most likely for the pet trade, and later escaped or released into the wild by owners.

By identifying these differences between regional populations of C. acutus, conservation efforts can establish population clusters which consider the populations as independent management units that may have different needs and focuses.

Natalia Rossi, Country Manager of the Cuba Program at the Wildlife Conservation Society and the study’s co-author explains some of the challenges around taking samples from large crocodiles: “Our study involved several research teams across multiple sites and countries and often in difficult field conditions. For four years between May to July the team would record, mark and sample crocodile hatchings, and juvenile and adult crocodiles in Cuba’s Birama Swamp, one of the study sites. It was not unusual for us to have to spend hours in the mangrove lakes waiting for one to appear, and when a crocodile was spotted the whole team would have to enter the water to help net it. While both exciting and rewarding work, it is also dangerous as the crocodiles are powerful and it involves lots of team co-ordination and trust to secure the crocodile to enable us to take samples.”

The study was ambitious and could not have been achieved without its global collaboration and efforts from its long list of authors. In particular, the late John Thorbjarnarson and Rafael Crespo, who dedicated their lives to this research.

Lead authors, Dr Natalia Rossi and Dr Angelica Menchaca-Rodriguez stress the importance of collaborating across borders, particularly for such a widespread species. They said, “We are proud of having achieved this regional effort of understanding species at a scale no single scientist could have done.”

High levels of population genetic differentiation in the American crocodile (Crocodylus acutus) by N Rossi et al in PLOS ONE.