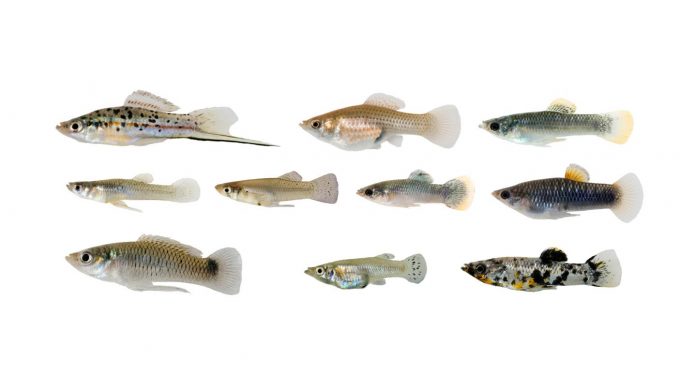 MANHATTAN, KANSAS — Several species of fish have adapted to harsh environments using the same mechanism, which brings to question evolutionary chance, according to a study by Kansas State University and Washington State University.

Michi Tobler, associate professor, Ryan Greenway, May 2019 doctoral graduate, and Nick Barts, doctoral student, all in the Division of Biology; Joanna Kelley, associate professor at Washington State University; and many additional collaborators recently published an article about repeated adaptations to extreme environments in Proceedings of the National Academy of Sciences.

“We are trying to understand how evolution and adaptation work,” Tobler said. “We stumbled across these fish living in this highly toxic water. It is so toxic that it kills most other living things by binding to an enzyme in the mitochondria — the powerhouse of cells — and shuts off energy production at the cellular level.”

The streams have high concentrations of hydrogen sulfide, a gas that is naturally dissolved in the water. Tobler and his collaborators found at least 10 different lineages of fish that have adapted to live in the extreme environment.

“Whether or not populations take the same path to adapting to novel environments is a long-standing question in evolutionary biology,” Kelly said. “Our research shows that the same pathways have been modified in multiple different species of hydrogen sulfide adapted fishes.”

All 10 adapted, regardless of location, using the same mechanism: tweaking the enzyme so the toxicant can’t bind to it.

“The cool thing about these enzymes is all organisms have them,” Tobler said. “We have them. Fungi have them. Plants have them. It’s the universal way to make energy. Yet, it is this ancient pathway that has been conserved for so long that is modified in these fish.”

According to Tobler, the fish also ramped up an existing detoxification mechanism inside the mitochondria so they can get rid of the hydrogen sulfide faster and survive when other non-adapted fish in the same species can’t survive in the toxic water. The multiple lineages of fish with this capability brings to question a view proposed by evolutionary biologist Stephen Gould, that if evolution repeated itself, it would lead to different outcomes every time.

“Thirty years ago, Gould said ‘if you could rewind the tape of life, you would get a different outcome every single time,’ meaning that evolution would not find the same adaptive solutions every time,” Tobler said. “What we actually found in all these lineages — where the tape of life has been replayed as they were exposed to the same sources of selection — is that evolution actually unfolds in very similar ways. I think it tells us something very fundamental about how organisms adapt and that adaptive solutions are possibly limited.”

The researchers are able to compare the fish with the adaptation living the toxic water with ancestors that live in the normal environment because there is not a barrier between habitats. Tobler said as a consequence of the fish adapting to the toxic environment, they are actually evolving into a new species. His graduate students have further research pending.

Tobler’s lab is funded by the National Science Foundation and the U.S. Army Research Office.