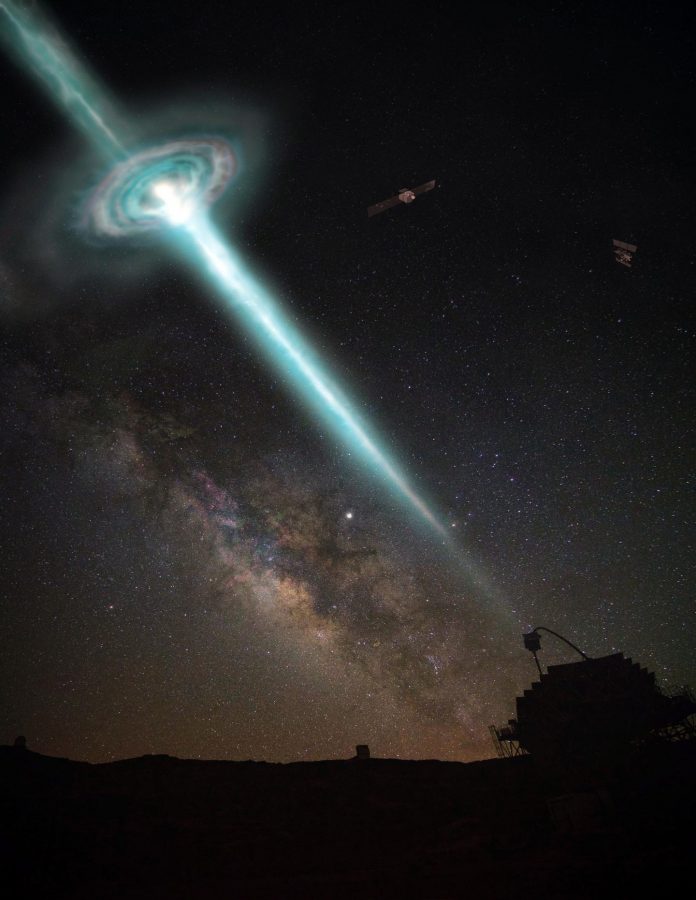 In 2019, the MAGIC telescopes detected the first Gamma Ray Burst at very high energies. This was the most intense gamma-radiation ever obtained from such a cosmic object. But the GRB data have more to offer: with further analyses, the MAGIC scientists could now confirm that the speed of light is constant in vacuum – and not dependent on energy. So, like many other tests, GRB data also corroborate Einstein’s theory of General Relativity. The study has now been published in Physical Review Letters.

Einstein’s general relativity (GR) is a beautiful theory which explains how mass and energy interact with space-time, creating a phenomenon commonly known as gravity. GR has been tested and retested in various physical situations and over many different scales, and, postulating that the speed of light is constant, it always turned out to outstandingly predict the experimental results. Nevertheless, physicists suspect that GR is not the most fundamental theory, and that there might exist an underlying quantum mechanical description of gravity, referred to as quantum gravity (QG). Some QG theories consider that the speed of light might be energy dependent. This hypothetical phenomenon is called Lorentz invariance violation (LIV). Its effects are thought to be too tiny to be measured, unless they are accumulated over a very long time. So how to achieve that? One solution is using signals from astronomical sources of gamma rays. Gamma-ray bursts (GRBs) are powerful and far away cosmic explosions, which emit highly variable, extremely energetic signals. They are thus excellent laboratories for experimental tests of QG. The higher energy photons are expected to be more influenced by the QG effects, and there should be plenty of those; these travel billions of years before reaching Earth, which enhances the effect.

GRBs are detected on a daily basis with satellite borne detectors, which observe large portions of the sky, but at lower energies than the ground-based telescopes like MAGIC. On January 14, 2019, the MAGIC telescope system detected the first GRB in the domain of teraelectronvolt energies (TeV, 1000 billion times more energetic than the visible light), hence recording by far the most energetic photons ever observed from such an object. Multiple analyses were performed to study the nature of this object and the very high energy radiation.

Tomislav Terzi?, a researcher from the University of Rijeka, says: “No LIV study was ever performed on GRB data in the TeV energy range, simply because there was no such data up to now. For over twenty years we were anticipating that such observation could increase the sensitivity to the LIV effects, but we couldn’t tell by how much until seeing the final results of our analysis. It was a very exciting period.”

Naturally, the MAGIC scientists wanted to use this unique observation to hunt for effects of QG. At the very beginning, they however faced an obstacle: the signal that was recorded with the MAGIC telescopes decayed monotonically with time. While this was an interesting finding for astrophysicists studying GRBs, it was not favorable for LIV testing. Daniel Kerszberg, a researcher at IFAE in Barcelona said: “when comparing the arrival times of two gamma-rays of different energies, one assumes they were emitted instantaneously from the source. However, our knowledge of processes in astronomical objects is still not precise enough to pinpoint the emission time of any given photon”. Traditionally the astrophysicists rely on recognizable variations of the signal for constraining the emission time of photons. A monotonically changing signal lacks those features. So, the researchers used a theoretical model, which describes the expected gamma-ray emission before the MAGIC telescopes started observing. The model includes a fast rise of the flux, the peak emission and a monotonic decay like that observed by MAGIC. This provided the scientists with a handle to actually hunt for LIV.

A careful analysis then revealed no energy-dependent time delay in arrival times of gamma rays. Einstein still seems to hold the line. “This however does not mean that the MAGIC team was left empty handed”, said Giacomo D’Amico, a researcher at Max Planck Institute for Physics in Munich; “we were able to set strong constraints on the QG energy scale”. The limits set in this study are comparable to the best available limits obtained using GRB observations with satellite detectors or using ground-based observations of active galactic nuclei.

Cedric Perennes, postdoctoral researcher at the university of Padova added: “We were all very happy and feel privileged to be in the position to perform the first study on Lorentz invariance violation ever on GRB data in TeV energy range, and to crack the door open for future studies!”

In contrast to previous works, this was the first such test ever performed on a GRB signal at TeV energies. With this seminal study, the MAGIC team thus set a foothold for future research and even more stringent tests of Einstein’s theory in the 21st century. Oscar Blanch, spokesperson of the MAGIC collaboration, concluded: “This time, we observed a relatively nearby GRB. We hope to soon catch brighter and more distant events, which would enable even more sensitive tests.”

Spokesperson of the MAGIC Collaboration

Outreach Coordinator of the MAGIC Collaboration