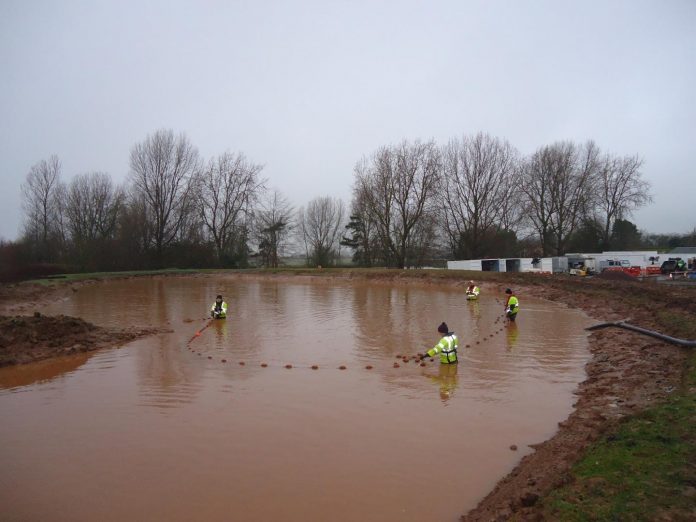 Organisms excrete DNA in their surroundings through metabolic waste, sloughed skin cells or gametes, and this genetic material is referred to as environmental DNA (eDNA).

As eDNA can be collected directly from water, soil or air, and analysed using molecular tools with no need to capture the organisms themselves, this genetic information can be used to report biodiversity in bulk. For instance, the presence of many fish species can be identified simultaneously by sampling and sequencing eDNA from water, while avoiding harmful capture methods, such as netting, trapping or electrofishing, currently used for fish monitoring.

While the eDNA approach has already been applied in a number of studies concerning fish diversity in different types of aquatic habitats: rivers, lakes and marine systems, its efficiency in quantifying species abundance (number of individuals per species) is yet to be determined. Even though previous studies, conducted in controlled aquatic systems, such as aquaria, experimental tanks and artificial ponds, have reported positive correlation between the DNA quantity found in the water and the species abundance, it remains unclear how the results would fare in natural environments.

However, a research team from the University of Hull together with the Environment Agency (United Kingdom), took the rare opportunity to use an invasive species eradication programme carried out in a UK fishery farm as the ultimate case study to evaluate the success rate of eDNA sampling in identifying species abundance in natural aquatic habitats. Their findings were published in the open-access, peer-reviewed journal Metabarcoding and Metagenomics.

“Investigating the quantitative power of eDNA in natural aquatic habitats is difficult, as there is no way to ascertain the real species abundance and biomass (weight) in aquatic systems, unless catching all target organisms out of water and counting/measuring them all,” explains Cristina Di Muri, PhD student at the University of Hull.

During the eradication, the original fish ponds were drained and all fish, except the problematic invasive species: the topmouth gudgeon, were placed in a new pond, while the original ponds were treated with a piscicide to remove the invasive fish. After the eradication, the fish were returned to their original ponds. In the meantime, all individuals were counted, identified and weighed from experts, allowing for the precise estimation of fish abundance and biomass.

“We then carried out our water sampling and ran genetic analysis to assess the diversity and abundance of fish genetic sequences, and compared the results with the manually collected data. We found strong positive correlations between the amount of fish eDNA and the actual fish species biomass and abundance, demonstrating the existence of a strong association between the amount of fish DNA sequences in water and the actual fish abundance in natural aquatic environments”, reports Di Muri.

The scientists successfully identified all fish species in the ponds: from the most abundant (i.e. 293 carps of 852 kg total weight) to the least abundant ones (i.e. one chub of 0.7 kg), indicating the high accuracy of the non-invasive approach.

“Furthermore, we used different methods of eDNA capture and eDNA storage, and found that results of the genetic analysis were comparable across different eDNA approaches. This consistency allows for a certain flexibility of eDNA protocols, which is fundamental to maintain results comparable across studies and, at the same time, choose the most suitable strategy, based on location surveyed or resources available,” elaborates Di Muri.

“The opportunity of using eDNA analysis to accurately assess species diversity and abundance in natural environments will drive a step change in future species monitoring programmes, as this non-invasive, flexible tool is adaptable to all aquatic environments and it allows quantitative biodiversity surveillance without hampering the organisms’ welfare.”