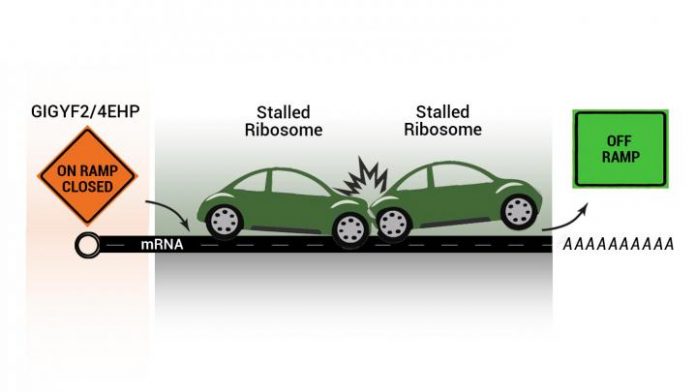 The DNA that comprises the chromosomes housed in each cell’s nucleus encodes the recipes for how to make proteins, which are responsible for the majority of the physiological actions that sustain life. Individual recipes are transcribed using messenger RNA, which carries this piece of code to a piece of cellular machinery called the ribosome. The ribosome translates the message into amino acids–the building blocks of proteins.

But sometimes messages get garbled. The resulting incomplete protein products can be toxic to cells. So how do cells clean up in the aftermath of a botched translation?

Some quality assurance mechanisms were already known–including systems that degrade the half-finished protein product and the messenger RNA that led to its creation. But Kostova led a team that identified a new tool in the cell’s kit for preventing damage when protein assembly goes awry. Their work was published by Molecular Cell.

Using CRISPR-Cas9-based genetic screening, the researchers discovered a separate, and much needed, device by which the cell prevents that particular faulty message from being translated again. They found two factors, called GIGYF2 and 4EHP, which prevent translation from being initiated on problematic messenger RNA fragments.

“Imagine that the protein assembly process is a highway and the ribosomes are cars traveling on it,” Kostova explained. “If there’s a bad message producing incomplete protein products, it’s like having a stalled car or two on the road, clogging traffic. Think of GIGYF2 and 4EHP as closing the on-ramp, so that there is time to clear everything away and additional cars don’t get stalled, exacerbating the problem.”

Loss of GIGYF2 has previously been associated with neurodegenerative and neurodevelopmental problems. It is possible that these issues are caused by the buildup of defective proteins that occurs without the ability to prevent translation on faulty messenger RNAs.

The Carnegie Institution for Science (carnegiescience.edu) is a private, nonprofit organization headquartered in Washington, D.C., with six research departments throughout the U.S. Since its founding in 1902, the Carnegie Institution has been a pioneering force in basic scientific research. Carnegie scientists are leaders in plant biology, developmental biology, astronomy, materials science, global ecology, and Earth and planetary science.