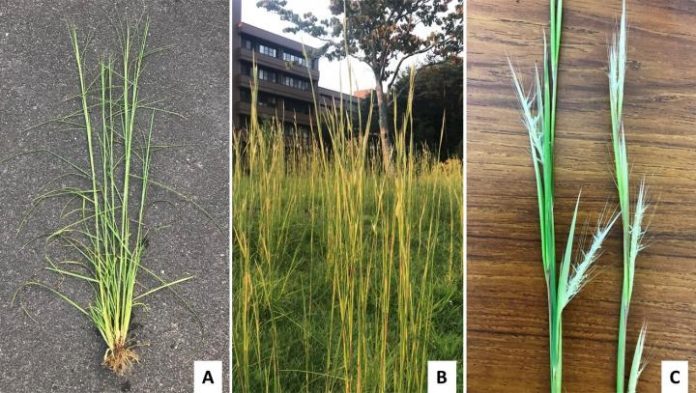 Native to the southeastern United States, a weedy grass has spread northward to Canada and also made its way to Australia and Japan. Andropogon virginicus grows densely packed and up to seven feet tall, disrupting growth patterns of other plants and competing for resources. When burned, it grows back stronger. There is no way to effectively remove the weed once it has invaded. But there might be a way to use it to human advantage.

An international team of researchers has found that A. virginicus extracts appear to be effective against several human diseases, including diabetes and cancer. The results were published on Dec. 31, 2020, in a special issue of Plants, titled “Biological Activities of Plant Extracts.”

“A. virginicus is an invasive weed that seriously threatens agricultural production and economics worldwide,” said paper author Tran Dang Xuan, associate professor in the Transdisciplinary Science and Engineering Program in the Graduate School of Advanced Science and Engineering at Hiroshima University. “However, no solution efficiently utilizing and tackling this plant has been found yet. In this paper, we highlight the potential application of A. virginicus extracts in future medicinal production and therapeutics of chronic diseases such as type 2 diabetes and blood cancer, which can deal with both crop protection and human health concerns.”

Researchers found high levels of flavonoids in the samples they extracted from the weed. These plant chemicals have significant antioxidant and anti-inflammatory properties, according to Xuan. When tested against a variety of cell lines, the extracted plant chemicals bonded to free radicals, preventing damage to the cells. At skin level, this helps prevent age spots by inhibiting a protein called tyrosinase. Among other, deeper healthful actions, this bonding also helps prevent knock-on cellular actions that can lead to type 2 diabetes.

The team also specifically applied the extracted chemicals to a line of chronic myelogenous leukemia, a rare blood cancer. The extract appeared to kill off the cancer cells.

Xuan said the researchers plan to establish a comprehensive process to isolate and purify the compounds responsible for known biological properties, as well as work to identify new uses. They will further test the therapeutical effects of the compounds, with the eventual goal of preparing functional pharmaceuticals for human use.

“Although A. virginicus has been considered a harmful invasive species without economic value, its extracts are promising sources of antioxidant, anti-diabetic, anti-tyrosinase, and antitumor agents,” Xuan said.

Since its foundation in 1949, Hiroshima University has striven to become one of the most prominent and comprehensive universities in Japan for the promotion and development of scholarship and education. Consisting of 12 schools for undergraduate level and 4 graduate schools, ranging from natural sciences to humanities and social sciences, the university has grown into one of the most distinguished comprehensive research universities in Japan. English website: https://www.hiroshima-u.ac.jp/en