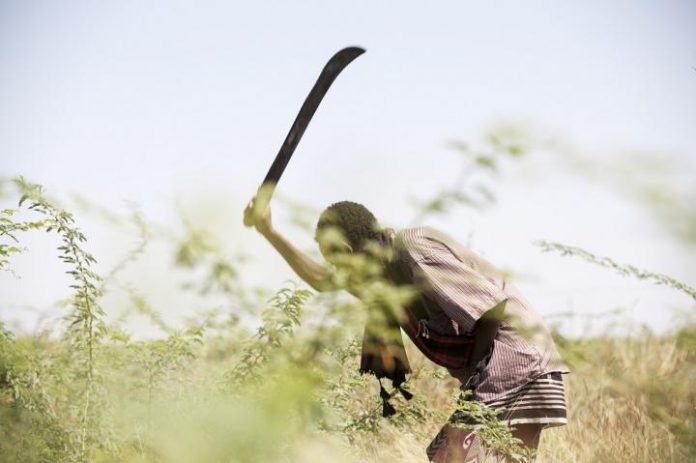 A new study suggests that clearing the invasive woody weed Prosopis julifora and grassland restoration in Baringo County, Kenya, may have significant financial benefits for local stakeholders and contribute to climate change mitigation.

Climate change, land degradation, and invasive alien species (IAS) such as Prosopis julifora are major threats to people’s livelihoods in arid and semi-arid areas with each of these having negative impacts on ecosystem services – including vegetation biomass, which is a prime resource for pastoralists and agro-pastoralists.

The team, comprising PhD students and established scientists from four countries and different disciplinary backgrounds, developed land use scenarios and assess what the implications of Prosopis management and grassland restoration are for soil carbon accumulation and local communities.

The scientists studied the impacts of Prosopis invasion and grassland degradation on soil organic carbon (SOC) in nine sublocations in Baringo County where it was introduced in the 1980s and promoted by the Kenyan government to provide wind breaks, a source of timber, fuelwood and charcoal.

The study combined data collected by several PhD students of the Woody Weeds project, such as socio-economic data to determine the size of the budget available for Prosopis management (Bekele et al. 2018) and the financial benefits of making charcoal from removed trees, soil measurements to assess changes in SOC following Prosopis removal (Mbaabu et al. 2020) and establishment of grassland. The data were linked to spatially-explicit land cover and land use maps derived from satellite data (Mbaabu et al. 2019). Then, spatially explicit Invasive Alien Species (IAS) management and restoration scenarios were generated.

Dr René Eschen, an ecologist working for CABI in Switzerland and lead author of the paper, said, “While Prosopis does provide these benefits, it has also spread rapidly across a large area, leading to a loss of native vegetation, agricultural areas and grazing land. These changes are primarily driven by Prosopis invasion, along with human activities like deforestation, land clearing, overgrazing, and climate change.

“Our results show that the one-off budget based on the average willingness to pay expressed by inhabitants of Baringo would suffice to manage a considerable area of
Prosopis in Baringo in a single year, and that the conversion of invaded areas into grassland would provide significant financial benefits. A sustained effort over several years might enable sustainable management of a large part of the areas invaded with Prosopis in most sublocations.

“The results also indicate what generates the financial benefit and which areas could be prioritized for treatment. Although Prosopis management is expensive, the results suggest that a large part of the costs in Baringo can be offset by immediate financial benefits from the sale of charcoal. This is important, because the affected communities have limited human and financial resources for environmental management.”

The researchers also argue that there are financial and immaterial benefits of restoring grasslands that may re-establish within 30 years if they are not overgrazed. They say that part of the benefits could, in fact, be realized within less than 10 years with only the full accumulation of SOC needing three decades.

Dr Sandra Eckert, remote sensing specialist of the Centre for Development and Environment, University of Bern, Switzerland, said, “Grasslands provide non-monetary benefits, including cultural and regulating services including the regulation of climate, floods and erosion. However, the likelihood of grasses establishing depends on suitable climatic conditions and grazing management.

“With climate change and the associated higher variability of the beginning and duration of the various seasons, grass is considered a more secure crop compared to local staple crops like maize or beans; particularly perennial grass species require less rain for completion of a cropping cycle. Growing grass for seed production is widespread in some of the sublocations, and farmers can also sell the hay.”

“Spatial and integrative management scenarios should be used more extensively to support land management decisions, especially where natural as well as financial resources are scarce and where the costs and benefits of managing IAS are unequally distributed among local stakeholders.”

This study of Prosopis in Baringo County shows that relatively small investment in IAS clearing and restoration of degraded grassland in Eastern Africa may result in significant benefits for local communities managing the land that will support traditional livelihoods and increase SOC in the long term.

Dr Charles Kilawe, an ecologist from Sokoine University of Agriculture in Tanzania, said that the benefits realized from the management of Prosopis juliflora revealed by this study should not be used to promote the introduction of the species to new areas, as this would likely cause serious negative environmental and livelihood impacts.

“Integrating and linking such data may be particularly useful to develop accurate and realistic IAS management scenarios that can be used to illustrate costs and benefits of management interventions, where they are most needed and most cost-effective, and thus help stakeholders select the most appropriate and feasible approach that suits their needs.”