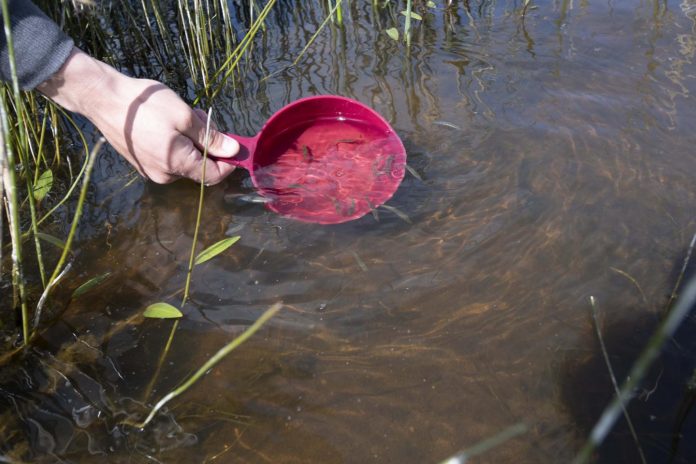 Fish kills are a recurring phenomenon in lakes suffering from oxygen depletion. Often the kills are triggered by factors like an algae bloom, but now a new study reports on a new, climate-related cause of fish kills.

A grave example is reported from a lake in Denmark. In 2018, Denmark was hit by extreme summer drought and temperatures in May, June and July were 3 degrees higher than the average for the previous 30 years. At the same time, an average of only 27 mm of rain fell compared to normally 56 mm.

The lake, called Lake Filsø, received no rainfall until a thunderstorm with heavy rain blew across the lake on July 28, delivering 22 mm in only a few hours.

‘Huge amounts of water flowed from the catchment into the lake and brought with it huge amounts of organic material. This cocktail led to massive fish kills in the lake. Events like this are dramatic and can completely reset an entire ecosystem,’ explains biologist and Associate Professor Theis Kragh from the University of Southern Denmark.

A few days after the heavy rainfall, 1,203 dead pike were found in the lake. A month later, only a single pike was caught in the gill nets. The stocks have never recovered, and this year the researchers released 8,000 pike fry and 350 kg of spawning stock biomass of perch to help the stocks return.

‘And we will follow up with more pike breeding in the future. The tragedy is that the oxygen depletion only lasted four days. On day five, oxygen levels were normal again, but then the fish had died,’ he says.

How could it happen?

The reason why heavy rainfall can lead to massive fish kills is this:

When rain falls, it runs through ditches and drainage pipes and ends up in the lake. On its way, it picks up a lot of labile organic matter from the soil; leaves, mud, and partially degraded organic matter.

When all this organic matter is flushed out into the lake, it becomes a target of hungry bacteria. When the bacteria consume the organic matter, they use oxygen and they take that oxygen from the water. This causes oxygen depletion in the lake, and the fish die.

‘Lake Filsø is not the only lake to have experienced this, and it will happen to other lakes. Until now, we have considered extreme drought followed by heavy rain as a 20- or 100-year event, but climate change is a reality now and we should rather consider it a 5- or 10-year event,’ says Theis Kragh.

‘We have not done scientific studies of rivers and streams, but I believe this could be the explanation why there are only very few fish in otherwise healthy rivers and streams that should contain lots of fish.’

Theis Kragh and his colleagues are now working on tracing the organic material in Lake Filsø back to its point of origin in the catchment surrounding the lake.

‘If we know where it comes from – which field or heath – we can work with the drainage of the particular area. Currently, the drainage is so effective that organic matter is flushed very quickly into the lake. If the drainage gets slowed down, more rainwater will be absorbed by the soil rather than being washed out into the lake,’ he says.

Denmark also experienced hot weather and drought in 2019 but received a little more rain than in 2018, and Lake Filsø was not exposed to the same phenomenon as in 2018.