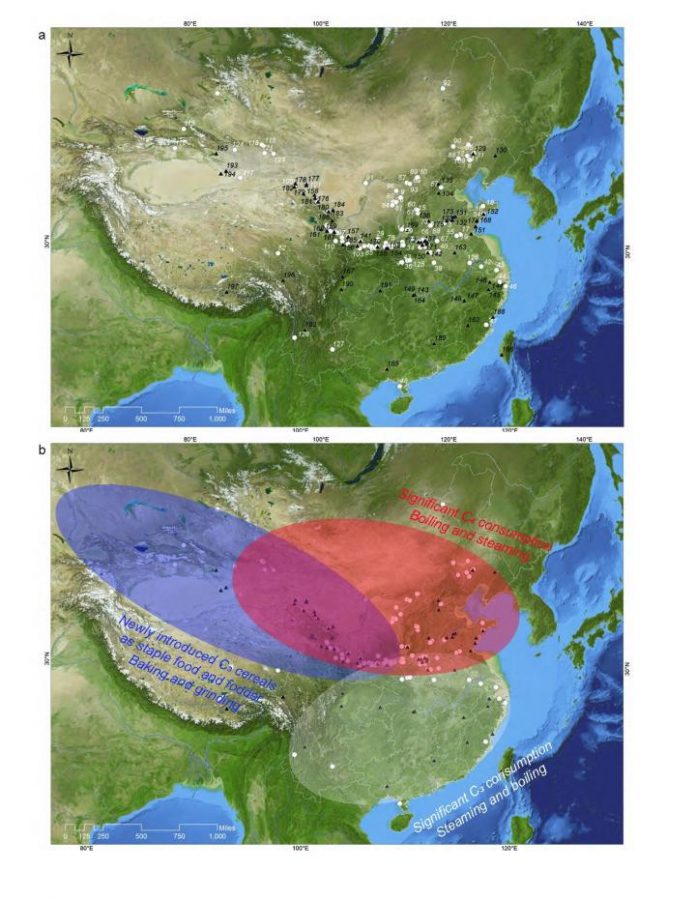 Changing cuisines in ancient China were driven by multiple environmental and cultural practices over thousands of years, according to a study published November 4, 2020 in the open-access journal PLOS ONE by Xinyi Liu of Washington University in St. Louis and Rachel E. B. Reid of Virginia Polytechnic Institute and State University in Virginia.

Cereal grains – including wheat, rice, barley, millet and more – are the most important food sources in the world today. But understanding how these foods originated and spread across the world requires a global effort. In this study, Liu and Reid focus on the ancient history of staple cereals across China, a country well-known for its diverse food products and early adoption of many domesticated plants.

The authors compiled published data of stable carbon and nitrogen isotope compositions measured from 2,448 human skeletal samples from 128 archaeological sites across China, covering a time span over 6,000 years. These isotopic data are indicators of what kinds of plants these humans were predominantly eating, allowing the authors to infer cuisine patterns across time and space. They found that prior to 2000 BC, Chinese staple cuisines were strongly differentiated between northern and southern cultures, while cultures younger than that were dominated by east-west differences.

The authors infer that these patterns of changing cuisines are not driven by traditional narrative of “stages” of changing subsistence modes (hunting, foraging, pastoralism, farming), but are instead driven by multiple factors that favored various hybridized subsistence modes at different times and spaces. They argue that the early north-south divide was driven by environmental differences that favored different plant resources in wetland vs. arid regions, while the later east-west division was driven by differences in cultural practice, with eastern cooking habits of boiling and steaming less suited to adopting new cereals like wheat and barley.

Liu adds: “It appears that cooking is an important force shaping the ancient world. In the context of prehistoric ‘food globalisation’, the reaction of the local cooking tradition to novel exotic food ingredients is a key driver of their adoption and translocation, sustaining the economic foundation of the ancient world…

The dispersal of crops into new areas was not necessarily accompanied by the spread of the intrinsic cooking technology. Sometimes novel grains could be incorporated into the local cuisines. We can always relate this to our own experience of food and cooking. Southern style homemade baked beans with bacon are folded into English breakfast tradition to be served on toast.”

Funding: National Science Foundation, under grant 1826727, “The origins and spread of millet cultivation”, PI: X. Liu; the European Research Council, under grant 249642, “Food Globalisation in Prehistory”, PI, M. Jones. Sponsors did not play any role in research, decision to publish, or preparation of the manuscript.

In your coverage please use this URL to provide access to the freely available article in PLOS ONE: https://journals.plos.org/plosone/article?id=10.1371/journal.pone.0240930