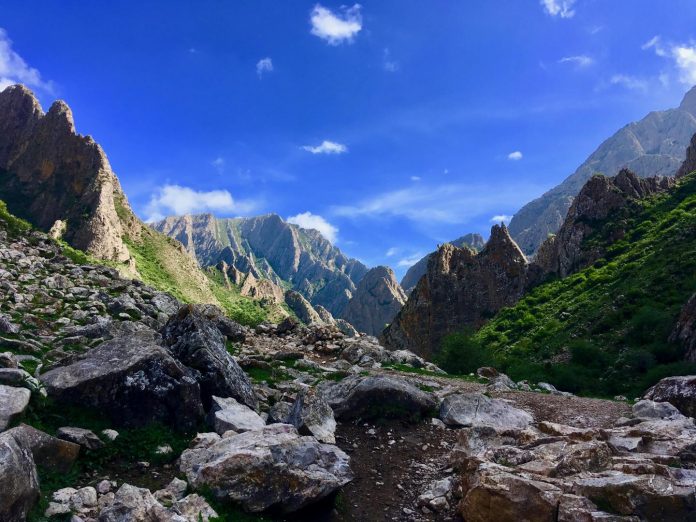 While the continents of Africa and Europe have been obvious and fruitful treasure troves for exploration and discovery of our modern human origins, Asia has been somewhat overlooked. Scientists have thought that modern humans left Africa about 60,000 years ago and, as they colonized Western Eurasia, found a world empty of any other archaic hominin species. This assumption stemmed in part from the fact that the prehistory of Asia is poorly known compared to that of Africa and Europe.

But research published this week in the journal Science adds more evidence to the record that Denisovans, a group of extinct hominins that diverged from Neanderthals about 400,000 years ago, may have more widely inhabited northeast central Asia. Ancient Denisovan mitochondrial DNA has been recovered in sediments from Baishiya Karst Cave, a limestone cave at the northeast margin of the Tibetan Plateau, 3280 meters above sea level. Samples of sediments were analyzed by an international team including ASU researcher Charles Perreault. Denisovan mitochondrial DNA was recovered that have been dated from around 100,000 to 60,000 years ago, and also possibly as recently as 45,000. If true, this last date may overlap with the presence of modern humans in northeast central Asia.

Perreault is a research affiliate with the Arizona State University Institute of Human Origins and an associate professor with the School of Human Evolution and Social Change.

“When we started developing this project about 10 years ago,” said Perreault, “none of us expected Baishya Cave to be such a rich site. We’ve barely scratched the surface — three small excavation units have yielded hundreds of stone tools, fauna and ancient DNA. There’s a lot that remains to be done.”

A mandible fossil (the “Xiahe mandible”) from the same cave and dated to 160,000, had been previously identified, tenuously, as Denisovan, based on a single amino acid position. This current study dispels any doubt left that the Denisovans occupied the cave.

This discovery in Baishiya Karst Cave is the first time Denisovan DNA has been recovered from a location that is outside Denisova Cave in Siberia, Russia — previously the single location in the world where a handful of DNA-bearing Denisovan fossil bones have been discovered. In 2010, a fingerbone belonging to a previously unknown hominin species was found buried in Denisova Cave in the Russian Altai Mountains. Evidence of this new species forced anthropologists to revise their model of human evolution outside of Africa.

Finding Denisovan DNA on the Tibetan Plateau itself is surprising. Evidence of archaic hominins 2000 meters above sea level is unusual. Life this high on the plateau is harsh for many reasons, including its thin air, and humans can develop altitude sickness anywhere above 2500 meters above sea level. This suggests that the Denisovans may have evolved adaptations to high altitude, much like modern Tibetans. The dates of the sediments with mitochondrial DNA, along with the older 160,000-year-old Xiahe mandible, suggest that the Denisovans have been on the Plateau perhaps continuously for tens of thousands of years — more than enough for genetic adaptations to emerge.

Getting DNA samples from geographic locations outside of Siberia is also important to understand the genetic diversity and the population structure and history of the Denisovan group as a whole. Researchers suspected that Denisovans were widespread in Asia, based on the widespread Denisovan genomic signal among present-day Asians.

The Denisovan fossil and the DNA it contained, indicate that early modern humans coexisted in Asia with other archaic hominin species, but, unexpectedly, that they interbred with them. Like Neanderthals, Denisovan population intermixed with modern humans as they dispersed into Asia. In fact, there’s evidence that the genetic adaptations to high altitude in present-day Tibetans come from Denisovans. If confirmed, this is a great example of how intermixing with local archaic populations has shaped, and helped, the spread of modern humans around the world. In this case, it allowed humans to colonize the Tibetan Plateau perhaps faster than they would otherwise have been able to.

“Baishiya Cave is an extraordinary site that hold tremendous potential to understand human origins in Asia,” said Charles Perreault. “Future work in Baishiya Cave may give us a truly unique access to Denisovan behavior and solidifies the picture that is emerging, which is that Denisovans, like Neanderthals, were not mere offshoots of the human family tree — they were part of a web of now-extinct populations that contributed to the current human gene pool and shaped the evolution of our species in ways that we are only beginning to understand.”