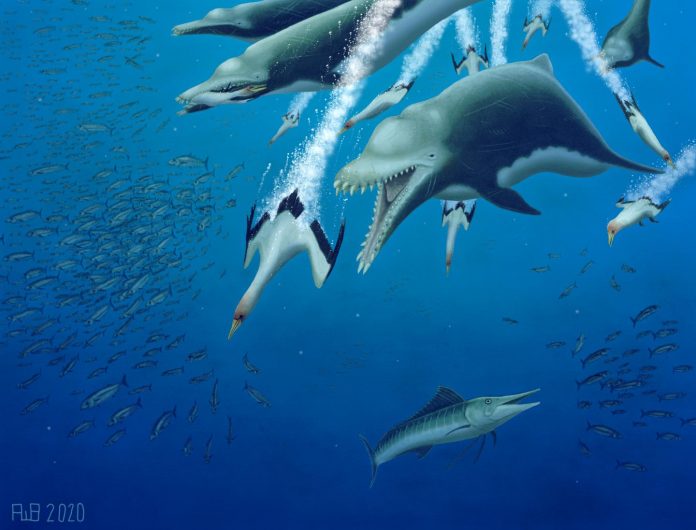 A report in the journal Current Biology on July 9 offers a detailed description of the first nearly complete skeleton of an extinct large dolphin, discovered in what is now South Carolina. The 15-foot-long dolphin (Ankylorhiza tiedemani comb. n.) lived during the Oligocene–about 25 million years ago–and was previously known only from a partial rostrum (snout) fossil.

The researchers say that multiple lines of evidence–from the skull anatomy and teeth, to the flipper and vertebral column–show that this large dolphin (a toothed whale in the group Odontoceti) was a top predator in the community in which it lived. They say that many features of the dolphin’s postcranial skeleton also imply that modern baleen whales and modern toothed whales must have evolved similar features independently, driven by parallel evolution in the very similar aquatic habitats in which they lived.

“The degree to which baleen whales and dolphins independently arrive at the same overall swimming adaptations, rather than these traits evolving once in the common ancestor of both groups, surprised us,” says Robert Boessenecker of the College of Charleston in Charleston, South Carolina. “Some examples include the narrowing of the tail stock, increase in the number of tail vertebrae, and shortening of the humerus (upper arm bone) in the flipper.

“This is not apparent in different lineages of seals and sea lions, for example, which evolved into different modes of swimming and have very different looking postcranial skeletons,” he adds. “It’s as if the addition of extra finger bones in the flipper and the locking of the elbow joint has forced both major groups of cetaceans down a similar evolutionary pathway in terms of locomotion.”

Though first discovered in the 1880s from a fragmentary skull during phosphate dredging of the Wando River, the first skeleton of Ankylorhiza was discovered in the 1970s by then Charleston Museum Natural History curator Albert Sanders. The nearly complete skeleton described in the new study was found in the 1990s. A commercial paleontologist by the name of Mark Havenstein found it during construction of a housing subdivision in South Carolina. It was subsequently donated to the Mace Brown Museum of Natural History, to allow for its study.

While there’s much more to learn from this fossil specimen, the current findings reveal that Ankylorhiza was an ecological specialist. The researchers say the species was “very clearly preying upon large-bodied prey like a killer whale.”

“Whales and dolphins have a complicated and long evolutionary history, and at a glance, you may not get that impression from modern species,” Boessenecker says. “The fossil record has really cracked open this long, winding evolutionary path, and fossils like Ankylorhiza help illuminate how this happened.”

“There are many other unique and strange early dolphins and baleen whales from Oligocene aged rocks in Charleston, South Carolina,” Boessenecker says. “Because the Oligocene epoch is the time when filter feeding and echolocation first evolved, and since marine mammal localities of that time are scarce worldwide, the fossils from Charleston offer the most complete window into the early evolution of these groups, offering unparalleled evolutionary insight.”

This work was supported by the National Science Foundation Division of Earth Sciences.

Current Biology (@CurrentBiology), published by Cell Press, is a bimonthly journal that features papers across all areas of biology. Current Biology strives to foster communication across fields of biology, both by publishing important findings of general interest and through highly accessible front matter for non-specialists. Visit: http://www.cell.com/current-biology. To receive Cell Press media alerts, contact [email protected]