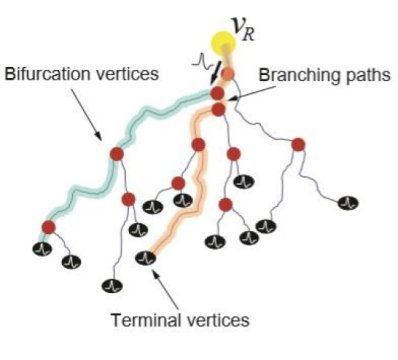 A team of bioengineers at UC San Diego has answered a question that has long puzzled neuroscientists, and may hold a key to better understanding the complexities of neurological disorders: Why are axons, the spindly arms extending from neurons that transmit information from neuron to neuron in the brain, designed the way they are?

Axons are not designed to minimize the use of cell tissue — they wouldn’t be so long and convoluted if that were the case. Conversely, they’re not optimized for speed, as recent studies have shown that axons don’t fire as fast as they physically could, since this would overwhelm the neuron and lead to a loss of network activity.

So what is the role of the geometry of axons in information flow in the brain?

This underlying principle of neuroscience, published July 11 in Scientific Reports, could revolutionize our understanding of how signal flow in the brain can be measured and perturbed, and could have an equally large impact on artificial neural networks in the field of machine learning.

The specific balance that biological neurons are designed to accommodate is called the refraction ratio: it’s the ratio between the refractory period of a neuron — when the neuron is unable to process incoming signals since its ion channels are resetting after being flooded with sodium — and the signal latency of information traveling down the axon. When that ratio approaches one, there is perfect balance, and the neuron is operating as efficiently as possible.

In the study conducted by first author Francesca Puppo, a postdoctoral researcher in Bioengineering Professor Gabriel Silva’s lab at the Jacobs School of Engineering at UC San Diego, the median refraction ratio value of the nearly 12,000 axonal branches examined was 0.92, quite close to the theoretically predicted perfect balance.

The study used a dataset from the NeuroMorpho database that looked at a type of neuron called basket cells. This data was from rats, but humans have basket cells too. Puppo used the 3D morphological data to reconstruct a graph-based model of the neurons’ axons and axon branches. Then she calculated the conduction velocity along the axons given the diameter at different points along the axonal arborizations, and estimated the refractory period along the axon from soma to synaptic terminals based on data in the literature. The conduction velocity and length of each axon branch were used to calculate the propagation delay, which she compared to the refraction period to calculate the refraction ratio.

Long, short, straight and curvy axons all had a refraction ratio approaching one. This means that when axons grow in a long and curved shape, it’s designed that way by the neuron to slow down the action potential of signals in order to optimize the refraction ratio. When neurons aren’t signaling at this ratio, there is a breakdown in information flow efficiency between cells.

One example of this breakdown in efficiency that Silva and colleagues at the UC San Diego School of Medicine are starting to investigate is in patients with autism spectrum disorder.

“The hypothesis we have is that the refraction ratio deviates from the ideal in neurodevelopmental disorders such as autism,” Silva said. “We think that may be the case for individual neurons, as well as networks of neurons.”

Puppo added that understanding this baseline of optimal function in neurons will allow researchers to better understand how information flow is perturbed in a variety of ways, including other neurological disorders such as schizophrenia, for example, as well as better understanding how drugs affect neuron function, since pharmacological drugs impact the cell’s activity and the way synaptic transmission occurs in networks of neurons.

“It would be interesting to investigate how drug perturbation affects signaling efficiency through computation of the refraction ratio for pairs of neurons in in-vitro networks of neurons before and after exposure to different chemical compounds,” Puppo said. “The detection of a change in the refraction ratio could be helpful in the determination of their neural rescue properties.”

On the non-biological side, understanding the function of the refraction ratio and the shape of axons has implications in the development of more brain-like artificial neural networks.

Whereas traditional artificial neural networks have many weighted incoming signals with an output that’s a summation of all of these signals, Silva and his lab are developing a new paradigm that adds the element of time to the mix — like the refractory period does in biological systems — so not all incoming signals are calculated in the output.

In geometric spatial-temporal artificial networks they are building, the time a signal takes to reach the node is also a factor in the output, similar to the way the refractory period functions in the human brain. This adds complexity to the system, but makes the learning process richer.

Silva is developing a fundamentally novel machine learning architecture based on these networks as part of the Center for Engineering Natural Intelligence at the Jacobs School of Engineering.

In addition to studying the refraction ratio of people with neurological disorders and applying the concept to artificial neural networks, Puppo said additional further work includes studying varying types of neurons to understand if some have refraction ratios that deviate slightly from 1 to serve a specific purpose in a cell’s dynamics.