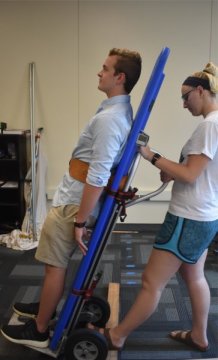 You probably overestimate just how far someone can push you before you reach your tipping point, new research suggests.

No, we’re not talking about your emotional tipping point.

A new study examined how far people thought they could lean over backwards before they would actually fall to the ground. When study participants were put into a device that slowly and safely tilted them, most thought they reached their tipping point when they were tilted somewhere near 14 degrees from vertical (straight up and down).

But research suggests the actual tipping point for most people is nearer to 8 or 9 degrees, said Dennis Shaffer, lead author of the study and associate professor of psychology at The Ohio State University, Mansfield.

Study participants were even worse at estimating when they watched models being tilted backwards — in that case, they projected the tipping point would be nearly 45 degrees.

“That’s about 35 degrees off from reality,” Shaffer said.

As if that weren’t bad enough, the study found we can’t tell when we are standing straight up. And the miscalculations don’t end there.

“This study fits with other research we’ve done that shows people don’t do well estimating other kinds of angles, like the steepness of hills,” he said.

The study appears online in the journal Attention, Perception & Psychophysics and will be published in a future print edition.

A person’s tipping point can be calculated by knowing his or her height, weight and foot size. For nearly everybody, that point turns out to be less than 10 degrees, said study co-author Kirsten Greer, who works in Shaffer’s lab at Ohio State.

In this study, researchers conducted four experiments, each involving 42 to 60 college students, to see how well they could predict their own tipping point. In most cases, the researchers used a device called an inversion table.

Participants stood with their back against a flat board, were strapped in and then slowly tilted backward at their waist.

“They were instructed to tell us to stop when they felt they were at the point where they would no longer be able to stay upright and would fall over backward if they weren’t in this device,” Greer said.

For the average participant, that was near 14 degrees backward.

But an inversion table may not be the best way to measure our perceived tipping point. That’s because in most falls, people start falling from their feet and not their waist. So the researchers developed a different tilting apparatus, based on a hand truck, that would tilt people at their feet.

Even with this device, most people thought their tipping point was near 14 degrees, Greer said.

“Overall, people seem to have far less understanding about their body in space than they believe,” she said.

That point was shown again in one of the studies when people, after being tilted backward, were slowly brought back up to a standing position. They were asked to tell the researcher when they were perfectly vertical. Participants were asked to look straight ahead and not glance down during the experiment.

Average participants said they were straight up and down when they were still tilted backward about 6 degrees.

“People were shocked when they found out they weren’t standing straight up,” Greer said. “We didn’t have anyone who got to 0 degrees before telling us they were vertical.”

It’s not just issues involving the angle of human bodies that seem to perplex us, Shaffer said. In other research, he found that people overestimate the steepness of slopes, including staircases and escalators.

This new work could help inform research on preventing falls, which are a leading cause of injury and death in older Americans.

“It may be that as we age our perceived vertical becomes further away from true vertical, or we can no longer correct for the discrepancy between true vertical and what we perceive as vertical,” Shaffer said.

The perception of being vertical while actually tilted slightly backward also has implications for design of furniture and various types of seats, he said.