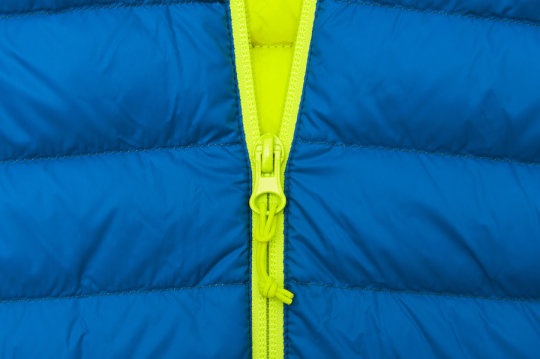 Engineers at the University of California San Diego have developed a wearable patch that could provide personalized cooling and heating at home, work, or on the go. The soft, stretchy patch cools or warms a user’s skin to a comfortable temperature and keeps it there as the ambient temperature changes. It is powered by a flexible, stretchable battery pack and can be embedded in clothing. Researchers say wearing it could help save energy on air conditioning and heating.

The work is published May 17 in the journal Science Advances.

“This type of device can improve your personal thermal comfort whether you are commuting on a hot day or feeling too cold in your office,” said Renkun Chen, a professor of mechanical and aerospace engineering at UC San Diego who led the study.

The device, which is at the proof-of-concept stage, could also save energy. “If wearing this device can make you feel comfortable within a wider temperature range, you won’t need to turn down the thermostat as much in the summer or crank up the heat as much in the winter,” Chen said. Keeping a building’s set temperature 12 degrees higher during the summer, for example, could cut cooling costs by about 70 percent, he noted.

There are a variety of personal cooling and heating devices on the market, but they are not the most convenient to wear or carry around. Some use a fan, and some need to be soaked or filled with fluid such as water.

Chen and a team of researchers at the UC San Diego Jacobs School of Engineering designed their device to be comfortable and convenient to wear. It’s flexible, lightweight and can be easily integrated into clothing.

The patch is made of thermoelectric alloys — materials that use electricity to create a temperature difference and vice versa — sandwiched between stretchy elastomer sheets. The device physically cools or heats the skin to a temperature that the wearer chooses.

“You could place this on spots that tend to warm up or cool down faster than the rest of the body, such as the back, neck, feet or arms, in order to stay comfortable when it gets too hot or cold,” said first author Sahngki Hong, a UC San Diego mechanical engineering alumnus who worked on the project as a PhD student in Chen’s lab.

A building block for smart clothing

The ultimate goal is to combine multiple patches together to create smart clothing that can be worn for personalized cooling and heating. So engineers designed a soft electronic patch that can stretch, bend and twist without compromising its electronic function.

The work is a collaboration between several research groups at the UC San Diego Jacobs School of Engineering. Chen’s lab, which specializes in heat transfer technology, led the study. They teamed up with nanoengineering professors Sheng Xu, an expert in stretchable electronics, Shirley Meng, an expert in battery technology, Ping Liu, who is also a battery expert, and Joseph Wang, a wearable sensors expert.

The researchers built the patch by taking small pillars of thermoelectric materials (made of bismuth telluride alloys), soldering them to thin copper electrode strips, and sandwiching them between two elastomer sheets.

The sheets are specially engineered to conduct heat while being soft and stretchy. Researchers created the sheets by mixing a rubber material called Ecoflex with aluminum nitride powder, a material with high thermal conductivity.

The patch uses an electric current to move heat from one elastomer sheet to the other. As the current flows across the bismuth telluride pillars, it drives heat along with it, causing one side of the patch to heat up and the other to cool down.

“To do cooling, we have the current pump heat from the skin side to the layer facing outside,” Chen explained. “To do heating, we just reverse the current so heat pumps in the other direction.”

The patch is powered by a flexible battery pack. It is made of an array of coin cells all connected by spring-shaped copper wires and embedded in a stretchable material.

One patch measures 5 × 5 centimeters in size and uses up to 0.2 watts worth of power. Chen’s team estimates that it would take 144 patches to create a cooling vest. This would use about 26 watts total to keep an individual cool on an average hot day (during extreme heat, estimated power use would climb up to 80 watts, which is about how much a laptop uses). By comparison, a conventional air conditioning system uses tens of kilowatts to cool down an entire office.

It’s more energy-efficient to cool down an individual person than a large room, researchers noted. “If there are just a handful of occupants in that room, you are essentially consuming thousands of watts per person for cooling. A device like the patch could drastically cut down on cooling bills,” Chen said.

The team is now working on patches that could be built into a prototype cooling and heating vest. They hope to commercialize the technology in a few years.