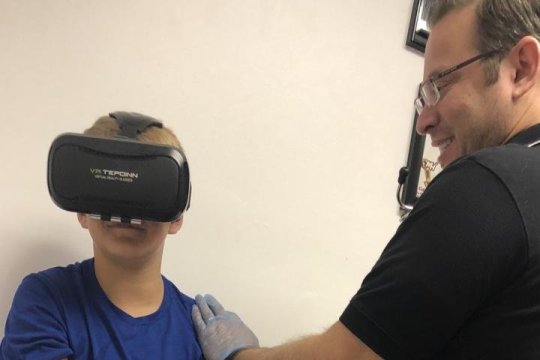 The scenario is all too familiar for the majority of parents. The crying, the screaming and the tantrums as they try to coax their children into the doctor’s office for routine immunizations. After all, who can’t relate to being fearful and anxious about needles?

Needle phobia is one of the most common fears among children who receive vaccines and they are exposed to needles on numerous occasions throughout their childhood. This causes many children fear, anxiety and pain. In some cases, needle phobia and needle anxiety may even cause parents to delay scheduled visits with the doctor.

A pediatrician has come up with an innovative solution to distract children from their fear, anxiety and pain using a virtual reality headset. He is the first to conduct a pilot study, published in the journal Pain Management, using this technique in a pediatric setting.

Chad Rudnick, M.D., an affiliate professor at Florida Atlantic University’s Charles E. Schmidt College of Medicine and founder of Boca VIPediatrics, got the idea for the study from an 8-year-old patient who came to his office with a virtual reality headset. The child placed the goggles on his head as Rudnick proceeded to give him an injection. Much to Rudnick’s delight, the child didn’t even flinch. Even his mother said, “Did this really happen?”

“That’s when the lightbulb went off in my head. It got me thinking whether this outcome was just a one-time incident or whether it would work again,” said Rudnick.

Prior research has theorized that humans have a limited capacity for attention and therefore if a person is attending to another stimulus away from noxious stimulus, they will perceive the painful stimulus as less severe.

To date, no studies have looked at virtual reality distraction during pediatric immunizations, so Rudnick decided to put his theory to the test working with two pre-med students and co-authors of the study, Emaan Sulaiman and Jillian Orden, in FAU’s Charles E. Schmidt College of Science.

The objective of this study was to test the feasibility, efficiency and usefulness of using virtual reality headsets as a means to decrease fear and pain associated with immunizations in pediatric patients. The study focused on fear and pain, both anticipated and actual as reported by the child and their caregiver.

For the study, Rudnick used a 3D virtual reality headset and a smartphone app that was inserted into the goggles giving the children the choice of a roller coaster ride, a helicopter ride or a hot-air balloon ride. Once the virtual reality headset was in place, Rudnick administered a single injection with the headset on until after the immunization was completed in about 30 seconds.

Results of the study showed that anticipated versus actual pain and fear were reduced in 94.1 percent of the pediatric study subjects. In addition, 94.1 percent of the pediatric study subjects reported that they would like to use virtual reality headsets again for their next immunization. Parents of the study subjects also reported lower perception of pain and fear in their child following the use of virtual reality headsets.

Most virtual reality headsets cost about $50 and smartphone apps cost less than $1 for unlimited use, which provides an inexpensive and easy-to-implement non-pharmacologic method to pleasantly district children.

“I hope this distraction technique catches on in other pediatric offices, because any method that increases the percentage of children vaccinated on-time and on schedule is critical in primary care pediatrics,” said Rudnick. “With many children crying, kicking and fighting in the exam room to avoid getting an injection, it is well worth pursuing further studies on the benefits of using virtual reality headsets. Moreover, this method could potentially reduce mortality and morbidity from vaccine preventable illnesses because children will receive their scheduled vaccinations.”