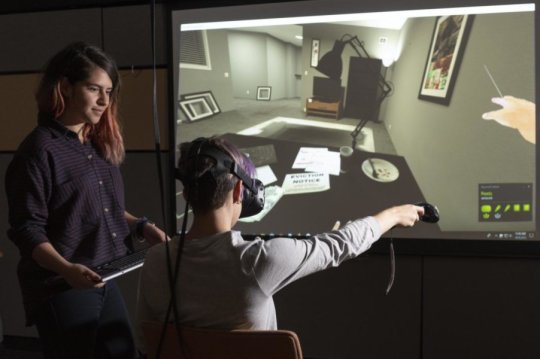 According to new Stanford research, people who saw in virtual reality, also known as VR, what it would be like to lose their jobs and homes developed longer-lasting compassion toward the homeless compared to those who explored other media versions of the VR scenario, like text. These findings are set to publish Oct. 17 in PLOS ONE.

“Experiences are what define us as humans, so it’s not surprising that an intense experience in VR is more impactful than imagining something,” said Jeremy Bailenson, a professor of communication and a co-author of the paper.

Many enthusiasts of virtual reality view the immersive technology as “the ultimate empathy machine” that can help people relate to each other better than novels, TV shows or films can.

But there is little research examining how exactly this emerging technology can alter people’s attitudes.

“About 10 million headsets have been sold in the U.S. over the past two years. So, many people now have access to VR experiences. But we still don’t know much about how VR affects people,” said Fernanda Herrera, a graduate student in the Department of Communication and the lead author of the research paper. “This research is an important step in figuring out how much of an effect this technology can have on people’s level of empathy in the long term.”

Past research on VR and empathy has shown mixed results and used small sample sizes composed mostly of college students, Herrera said. In addition, previous studies have not examined the long-term effect of VR on empathy — beyond one week.

As part of the research, Herrera, along with Stanford psychology scholar Jamil Zaki, Bailenson and psychology graduate student Erika Weisz, conducted two two-month-long studies with more than 560 participants, age 15 to 88 and representing at least eight ethnic backgrounds. Researcher Elise Ogle was also a co-author on the paper.

During the research, some participants were shown “Becoming Homeless,” a seven-minute VR experience developed by Stanford’s Virtual Human Interaction Lab.

In “Becoming Homeless,” a narrator guides participants through several interactive VR scenarios that would happen if they lost their jobs. In one scene, the participant has to look around an apartment to select items to sell in order to pay the rent. In another scene, the participant finds shelter on a public bus and has to protect belongings from being stolen by a stranger.

The researchers found that participants who underwent “Becoming Homeless” were more likely to have enduring positive attitudes toward the homeless than people who did other tasks, such as reading a narrative or interacting with a two-dimensional version of the scenario on a desktop computer. The same people were also more likely to sign a petition in support of affordable housing, according to the research.

“Taking the perspective of others in VR produces more empathy and prosocial behaviors in people immediately after going through the experience and over time in comparison to just imagining what it would be like to be in someone else’s shoes,” Herrera said. “And that is an exciting finding.”

Empathy, the ability to share and understand someone else’s emotions, is a critical part of meaningful social interactions, according to scholars. It has been shown to increase people’s understanding of one another and to motivate positive social behaviors, such as donating, volunteering or cooperating with others.

“We tend to think of empathy as something you either have or don’t have,” said Zaki, an assistant professor of psychology and a co-author of the paper. “But lots of studies have demonstrated that empathy isn’t just a trait. It’s something you can work on and turn up or down in different situations.”

In addition, according to the first study, 82 percent of participants in the VR condition signed a petition supporting affordable housing versus 67 percent of the people who read a narrative that asked them to imagine becoming homeless.

In the second study, 85 percent in the VR condition signed the petition in comparison to 63 percent who read the narrative. Of participants who went through the two-dimensional version of the VR experience, 66 percent signed the petition.

“What’s special about this research is that it gives us longitudinal evidence that VR changes attitudes and behaviors of people in a positive way,” Bailenson said.

Not all empathy exercises that introduce perspectives of different groups produce positive effects, the researchers said. For example, previous research has shown that when people are asked to take the perspective of their competitors, they become less empathetic toward them.

Similarly, the format of a VR experience also matters when considering how it might alter people’s attitudes, Herrera said.

Herrera, Bailenson and other researchers are working on other studies to figure out the nuances of VR’s effects on people.

But for now, Herrera and her team are excited about the evidence that they have gathered in their new study.

“Long after our studies were complete, some research participants emailed me to reflect on how they started becoming more involved in the issue afterward. One of them befriended a homeless person in their community and wrote me again once that person found a home,” Herrera said. “It was really inspiring to see that positive, lasting impact.”

The research was supported by a grant from the Robert Wood Johnson Foundation.