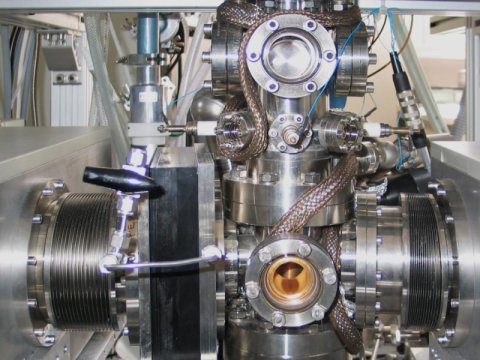 The job of hemoglobin in our body seems to be quite simple: It transports oxygen molecules through our bloodstream. But this only works so well because the hemoglobin molecule is extremely complex. The same applies to chlorophyll, which converts sunlight into energy for plants.

In order to understand the subtle tricks of such complex molecules, it is worth investigating similar but simpler structures in the lab. In a cooperation between TU Wien (Vienna) and research groups from Trieste, phthalocyanines have now been studied, whose molecular ring structure closely resembles the crucial sections of hemoglobin or chlorophyll. It turned out that the center of these ring structures can be switched into different states with the help of green light, which affects their chemical behavior.

Not only does this help to understand biological processes, it also opens up new possibilities for using the tricks of nature in the laboratory for other purposes — a strategy called “biomimetics” that is becoming increasingly important all around the world.

Rings with Metal Atoms at the Centre

“The phthalocyanines that we study are colorful dyes with a characteristic ring structure,” says Prof. Günther Rupprechter from the Institute of Material Chemistry at the Vienna University of Technology. “Crucial to this ring structure is that it can hold an iron atom in its center — just like the heme, the ring-shaped red dyes in hemoglobin. Chlorophyll, on the other hand, has a similar ring that captures magnesium atoms. “

In contrast to the more complicated natural molecules, the custom-made phthalocyanine dyes can be regularly placed side by side on a surface, such as tiles on the bathroom wall. “The rings were placed on a graphene layer in a regular pattern, so that a two-dimensional crystal of dye rings was created,” says Matteo Roiaz, who conducted the experiments together with Christoph Rameshan. “This has the advantage that we can examine many molecules at the same time, which gives us much stronger measurement signals,” explains Christoph Rameshan.

To study the vibration, the molecule was irradiated with laser light — using a combination of green and infrared light. This measurement yielded a result that seemed strongly counterintuitive at first glance: “We did not simply measure a single vibrational frequency of carbon monoxide, instead we found four different frequencies. No one had expected this,” says Günther Rupprechter. “The iron atoms are all identical, so the CO molecules attached to them should all show exactly the same behavior.”

As it turned out, the green light of the laser was responsible for a remarkable effect: at first, all the iron atoms were indeed identical, but the interaction with green light can switch them to different states. “This also changes the oscillation frequency of the CO molecule on the iron atom, which shows us how sensitively such structures react to tiny changes,” says Günther Rupprechter. “That is also the reason the biomolecules in our bodies have such a complex structure: the widely branched protein components have a minimal impact on the states of the metal atom, but this minimal impact can have very important implications.”

Until now, similar effects could only be studied at extremely low temperatures and in ultrahigh vacuum. “In the laboratory, we now have two methods in which such biologically relevant phenomena can be measured at room temperature and atmospheric pressure, with and without green light,” emphasizes Rupprechter. This opens up new possibilities for a better understanding of the chemical behavior of biological substances; it could also open up the opportunity to tailor novel molecules in order to optimize them for nature-specific chemical purposes.