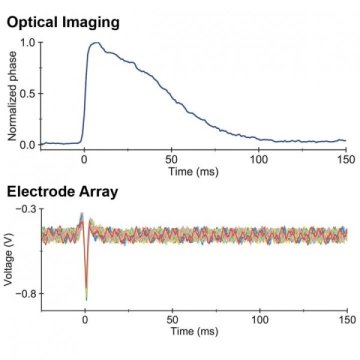 Researchers at Stanford University, Palo Alto, California, have created a noninvasive technology that detects when nerve cells fire based on changes in shape. The method could be used to observe nerve activity in light-accessible parts of the body, such as the eye, which would allow physicians to quantitatively monitor visual function at the cellular level. The study was published in the journal Light: Science and Applications. The work was funded by the National Eye Institute, part of the National Institutes of Health.

When nerves fire, there’s a change in the electrical potential (trans-membrane voltage) in the cell. Current techniques for monitoring nerve activity are invasive — requiring either electrodes placed near the nerves or fluorescent markers inserted into the cell. But a new technique, developed by the Stanford team, instead takes advantage of a side-effect of that change in voltage. As the nerve cell fires, the cell’s membrane temporarily becomes slightly stiffer, leading to a rounding of the cell’s shape. These cell shape changes can be picked up by interferometric (phase) imaging, which senses alterations in the the light passing through the cell or being reflected from its surface.

Tong Ling, Ph.D., and colleagues in the lab of Daniel Palanker, Ph.D., at Stanford constructed an interferometric microscope equipped with a high-speed camera that collects 50,000 frames per second. This speed is important because the changes in cell shape are subtle, so there’s very little signal compared to noise in the images. With high-speed imaging, the researchers can combine 50 frames together in chunks, averaging out the noise and increasing the strength of the signal. They also designed a novel algorithm that would detect informative regions (i.e. the parts of the cells that move the most) and boost the signal further.

“This nanometer-scale shape change is very difficult to see,” said Palanker, “but with ultrafast quantitative phase imaging, it actually turns out to be visible.”

Using a dish of cells that had been engineered to fire like neurons, the researchers compared their method to classic, electrode-based measurements of neurons firing. The recordings from their microscope precisely matched the electrical signals sensed by the electrodes.

The project is part of a larger collaboration funded through the NEI Audacious Goals Initiative for Regenerative Medicine, a program that aims to restore vision lost due to retinal injury or disease. The eventual goal of the project is to use this technology to detect signals passing through the optic nerve, or even signals from individual nerve cells in the retina. Direct monitoring of nerves in the eye will help researchers design and test new therapies to restore visual function.

“Our task in this joint grant was establishment of the basic facts — how fast and how much the cells move during action potential — and to devise the best technical strategies for the system to be then used in humans,” said Palanker. “I think this paper will be a solid reference regarding mechanical effects in cells when they fire.”

Moving forward, team members, including the grant’s principal investigator, Austin Roorda, Ph.D., University of California, Berkeley, will determine how to use this technique with optical coherence tomography, a type of imaging technology commonly used to visualize the back of the eye.

“Non-invasive, all-optical, neural recording techniques like those being pioneered by Dr. Palanker and his team are very exciting because, unlike other methods, these can potentially be used in human eyes,” said Roorda. “These developments give promise for a day when we can study retinal diseases in human on a cellular scale and evaluate the treatments to cure them.”